In blind taste tests, more participants have said they prefer Pepsi. But asked to identify their favorite soda, many of the same people say Coke.

When economists explain the contradiction, they say “the brand.” After all, a brand establishes a firm’s individuality. It can create an emotional loyalty that is separate from any of the product’s attributes. Then, having generated that loyalty, the firm hopes for some inertia that makes the cost of switching prohibitively high.

Where are we going? To the brand that is worth more than $7.15 billion.

Swiss based Nestlé just said it will pay Starbucks $7.15 billion. In exchange, it got no stores, no patents, nothing tangible. All that Nestlé agreed to purchase was the right to use the Starbucks brand. In supermarkets, restaurants and catering establishments around the world, Nestlé will be distributing coffee with the Starbucks name on it.

What we really have, though, is a synergy. Starbucks has the name and Nestlé has the distribution network in 190 countries. Especially in China where Starbucks plans to open a new store every 15 hours (600 new stores a year), Nestlé can focus on the supermarket side. Each had what the other wanted.

If you look at a top ten list of the top fast food brands, Starbucks is near the top: 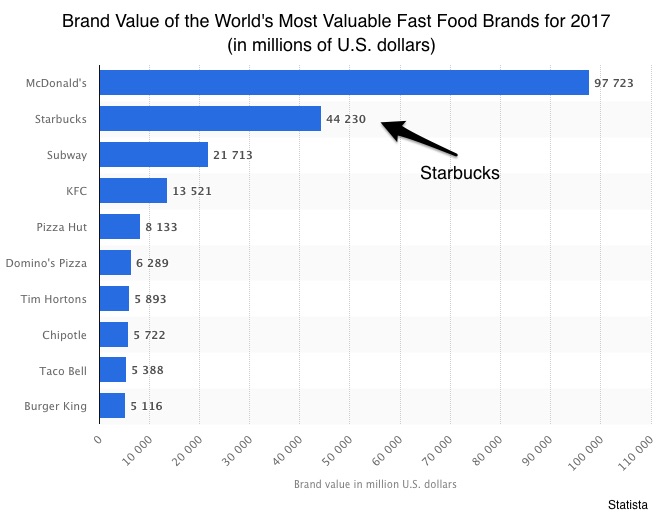 By a brand, we just can mean an identity that has value. For Nestlé, the Starbucks identity has many billions of dollars of extra value. When we add the royalties that Nestlé will also pay Starbucks, we get a very pricey brand.

The Nestlé Starbucks deal combines the power of two oligopolies. As firms that enjoy economies of scale and dominate large markets, oligopolies can afford the expense of global branding. They can also enjoy the entry barriers that branding erects when it creates a partial monopoly.

The result? The two firms slide further to the right on our market structure scale:

My sources and more: From Bloomberg to FT to the Washington Post, the Nestlé Starbucks deal and the China connection was everywhere. But for the most insight about brand value, I recommend this paper.

Three notes: Several sentences from this post were published in a past econlife. Also, because the Nestlé Starbucks deal needs regulatory approval, the two firms expect to proceed at the end of this year. And, our featured picture was from Reuters.

How a Chinese Smartphone Could Be Made in America