The Surprises That Occupational Licenses Create

North Carolina’s Board of Dental Examiners was composed of six dentists, one hygienist, and one “citizen member.” Like all dentists in the state, those on the Board were charging as much as $1000 for a whitening treatment. A similar procedure at a shopping mall kiosk could cost $75 to $125.

So you can see why the State Dental Board sent intimidating letters to those mall kiosks. Told they were committing a crime, the whitening businesses were supposed to stop doing what only licensed dentists could do. The letters didn’t work. Instead, the Board wound up with a Supreme Court decision that supported the mall-whiteners.

In 2015, a majority of the Supreme Court said that a state board mostly made up of dentists was constraining competition. Violating antitrust law, those dentists on the board were preventing competitors from entering the market. Because the Board had violated the Sherman Antitrust Act, the Supreme Court reduced its licensing power.

As for the occupations we are talking about, healthcare is at the top of the list: 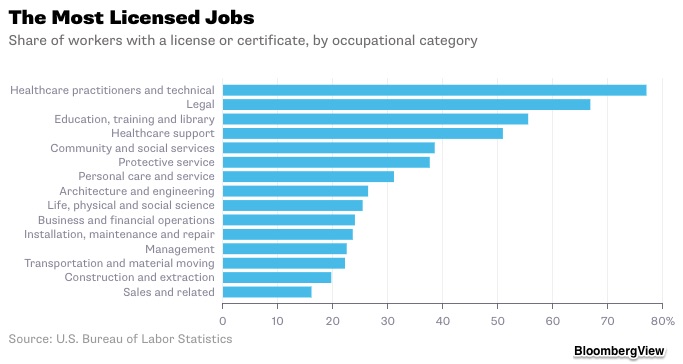 Providing a different perspective, this list gives us a good idea of the lower-income occupations that require licenses: 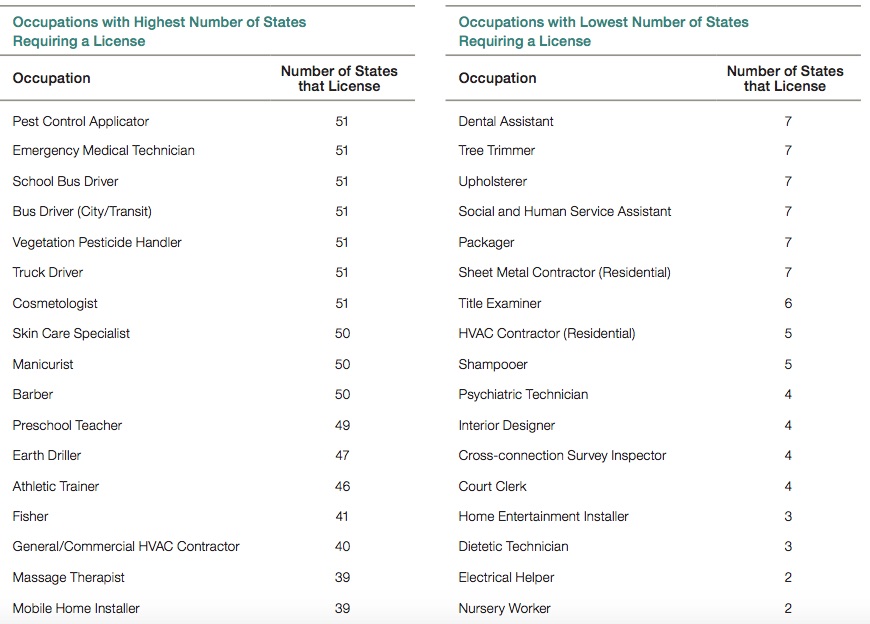 I thought also you might want to see what getting a license usually involves. The following table is based on a Harris Poll survey taken by approximately 10,000 workers:

In the past, we’ve looked at the licensing debate through a government lens. Saying it was exclusionary, we used supply and demand to illustrate the benefits and costs. On the plus side we saw less supply creating higher wages and regulation elevating quality. But the status quo was also limiting innovation and constraining labor markets.

Now though, I see there is so much more. According to Northwestern University sociologist Beth Redbird, we’ve ignored the women and minorities who benefited from licensing. Her research revealed that the objective standards of a state license opened doors for people who had been blocked by discrimination. Also, scholars had not considered the complementary institutions like training schools where job opportunities multiplied nor the restructuring that licensing generates.

Beyond supply, demand, and antitrust law, there is much more to be learned about occupational licensing.

My sources and more: Hearing an Econtalk podcast about the study from Northwestern, I realized it was time to update a 2014 post. From there I discovered recent papers from Brookings, the Hamilton Project, and this BloombergView article. Especially though, it was fun returning the the 2015 SCOTUSblog for the teeth whitening case.

Why the Retail Apocalypse Could Be a Renaissance