Why the Retail Apocalypse Could Be a Renaissance

Even the Oprah Chai was not enough.

Unable to reverse the decline of its tea-based Teavana stores, Starbucks has said all 379 will close this year. BusinessInsider called them a victim of the “retail apocalypse.”

And yes, if you look at store closings, the headline makes sense. Near the top of a long list, Gap is closing 200 stores, Gymboree, 102 and J. Crew, 39. However, Dollar General, Dollar Tree, and Ross Stores say they are opening hundreds of stores.

Where are we going? To Joseph Schumpeter and creative destruction.

But first, the plight of the retailer…

How Shoppers Have Changed

There is a massive split in retail. The middle is shrinking.

According to a new study from the accounting firm Deloitte, the reasons mostly relate to changes in these four components of consumer well-being:

But we also need to know if a shopper’s income bracket is the:

From here the report cites statistics that indicate spending on necessities (non-discretionary spending) is skyrocketing: 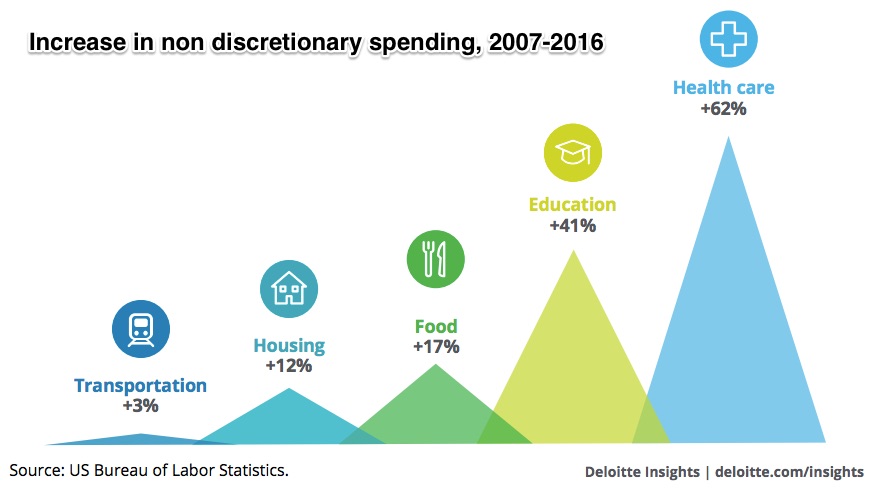 Although spending on necessities is up, the top 20% still has more of a wallet share for discretionary purchases. At the same time, the lowest income cohort has less of a share and the middle has remained the same:

The result is the split. You can see below that the low end and high end of retailing is growing, but not the middle: 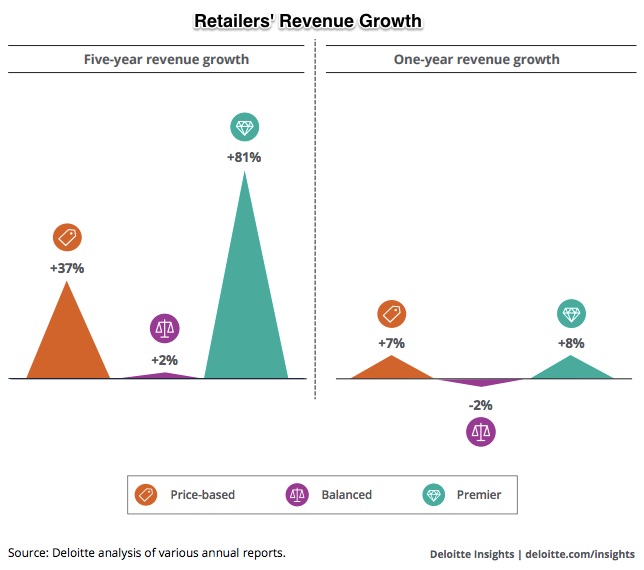 Providing more detail, the report tells readers that the low end retailer is price based and the high side caters to a premium crowd looking for unique products. However, a retailer in the middle that offers value through price and promotion has problems with store closings:

Meanwhile though, a second result could be an opportunity. In its report, Deloitte suggests we could have a Renaissance rather than an Apocalypse. Planning for the future, retailers just need to focus on the potential of the “new shopper” rather than the demise of bricks and mortar.

Retail’s bifurcation could be called creative destruction. Replacing the old with the new, creative destruction is the process through which an innovation or industry replaces what had existed. Yes, its downside can be devastating. But, as an engine of economic growth, it has elevated our GDP and our standard of living.

So, when thinking of the demise of 379 Teavana stores, we can also imagine a process through which a new retail structure will emerge.

My sources and more: Always interesting, Mark Bain on fashion at Quartz wrote about the shift in retail. His source was this Deloitte report that perfectly complemented BusinessInsider. And finally, for another complement, I recommend econlib on Joseph Schumpeter and creative destruction.

Please note that this post was slightly edited after publication to improve clarity.

The Surprises That Occupational Licenses Create

Econlife Quiz: Do You Know Your Baseball Economics