Callers do not select a male or female driver nor do they even know which gender could pick them up. Similarly, driver pay is based on an algorithm, not your gender. It relates to a base fare plus a per-mile and per-minute rate. In addition, incentive pay is a possibility for exceeding a set number of trips in a given area.

Because gender has nothing to do with the firm’s decisions, researchers believed it was the perfect place to study male/female pay differences. For their study, one of the economists even expected the women to make more.

The data surprised almost everyone.

Even at Uber, the women earn 7% less per hour than the men.  The reasons? Location, time, speed, and experience.

Men tend to take the middle-of-the night rides more than women. Women take more of the Sunday afternoon calls. Both pay more than other times. However, the men drive more hours than the women. They also select areas with higher surge spurts and less wait time.

Remaining longer at the firm and driving more hours, men are more experienced than the women drivers. Their experience helps them earn more. They become more clever at deciding where and when to drive and which trips to accept or cancel. An experienced driver who completed 2500 trips will earn 14% more that a novice with 100 or fewer trips.

These are the actual numbers:

Looking through a time lens, you can see the earnings gap is pretty consistent: 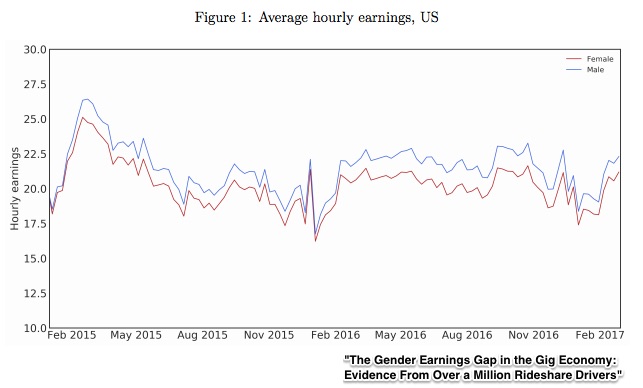 Whether looking at Uber or a 2017 paper from Blau and Kahn at Cornell, the most up-to-date gender pay gap data present little that is new. After considerable narrowing during the 1980s, and then a slower move upward, women seem stalled at 88 cents for every male dollar earned at a comparable job.

For me, much of this boils down to the division of labor at home. Because women have more responsibilities outside of work, they need more temporal flexibility at work. Especially in the highest paying jobs that demand the most hours, they need the flexibility and the extra time to get the big dollars.

And, at Uber too, that ability to be flexible (and drive fast) pays off.

My sources and more: If you just want more of the Uber facts, I recommend this Freakonomics podcast and transcript and the paper on which it is based. Meanwhile though, three of the authors of the Uber study wrote this Medium article. Finally, for a broader study of the current status of the gender pay gap. do look at this paper.

What a High Social Score Can Get You in China