What a High Social Score Can Get You in China

In Suining, near Shanghai, China tried out a social credit system in 2010. The whole country might have something similar in 2020.

In Suining, if you were older than 14, you started with a social score of 1,000 points. Then though, your behavior determined where you wound up. Caring for an elderly parent got you an extra 50 points while helping the poor added another 10. But if you were convicted of drunk driving or bribing an official, you lost 50.

After adding in a host of other criteria like education and even jaywalking, people got a point tally and then a letter grade. Individuals with an “A” could go to the best schools and get the best jobs. But if you were a “D” citizen, you were denied certain licenses and governmental services.

Although the Suining criteria remain a prototype for other pilot programs, the city’s initiative has been called a failure. The reason? Implemented from the “top down,” it needed more popular support.

Countrywide planning for a social scoring system formally began on June 14, 2014 when the State Council published its “Planning Outline For the Construction of a Social Credit System.” While all is not yet in place, they do have many local experiments (like Suining’s) and several national programs. The national lists have been created by groups that include China’s Supreme Court, the People’s Bank of China and the National Tourism Administration.

One person on the Supreme Court’s “discredited” (also called dishonest) list told of being unable to get a plane ticket or travel on a high speed train. For not paying a fine, he was also prohibited from staying in luxury hotels and buying expensive real estate. More serious offenders have a voicemail saying, “The person you are calling has been listed as a discredited person by the local court. Please urge this person to fulfill his or her legal obligations.”

In a 2016 article, the Wall Street Journal had this perfect summary of what China could create: 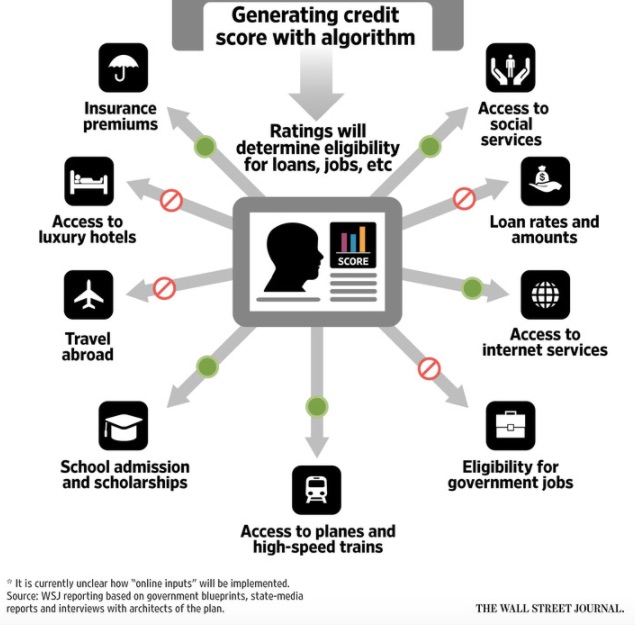 Economic systems need to decide how they will produce and distribute goods and services. A market economy mostly uses a “bottom-up” approach. Based on countless decisions from households and businesses, people get what they want and need. By contrast, China’s social scoring system is “top-down” control.

The one common thread shared by bottom-up and top-down economic systems is the three basic questions they have to answer:

My sources and more: Thanks to marketplace.org for reminding me it was time to take a second look at China’s credit scoring. My first stop was a chock-full-of-facts Wired article. But the Atlantic had the insight and the WSJ link to some resistance while here and here are more from WSJ.

Please note that after reading a May 9, 2018 paper from the University of Leiden’s Rogier Creemers, I edited this post to indicate that the Suining experiment was a failure.

The Lobster War Between Sweden and Maine