Jimmy Ma’s performance at the 2018 U.S. Figure Skating Championships might have been a turning point. Skating to “Turn Down For What” by DJ Snake and Lil Jon, his program was a crowd pleaser. Although he wound up afterwards at #11, the fans loved it.

Or, as Ma said, “…The whole point was to get people hyped. Get older people hyped and for younger people to think it is cool”:

Figure skaters are switching from Tchaikovsky or Stravinsky to James Brown and Lil Jon. They are skating to Beyoncé’s “Run the World (Girls)” and  K.D. Lang’s “Hallelujah.” Having just received the okay to play music with words, they are selecting songs that connect with young people.

After Sochi, the ISU (International Skating Union) recognized that Swan Lake was not grabbing younger viewers. Knowing it was time to resuscitate the sport and attract a new audience, they said lyrics could accompany a skating program.

You can see see from this WSJ summary of U.S. skating music, that figure skaters had traditionally selected soundtracks and classical music. For 2009-2010, 47% of their music was classical. But then, during 2015, they start to switch to more Rock/Pop and a bit of Hip-Hop/R&B. This year, one skater (Jason Brown) even selected a song from “Hamilton.” As for classical music, it has slid to 25%: 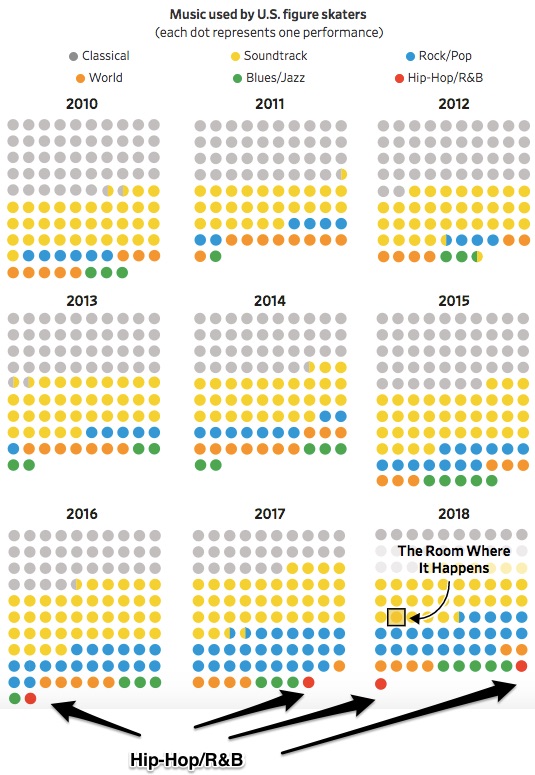 Our Bottom Line: Who Pays?

As Jimmy Ma was skating and the audience was cheering, Lil Jon might have had a different reaction. Because music represents an artist’s or a writer’s or a recording company’s intellectual property, someone has to pay to use it. What you pay though depends on how you use it. If the event is live like the Olympics, then blanket performing rights–paid by the broadcaster–cover it. Then, at the other end, the songwriter (Lil Jon?) should get the royalties. However, if we were instead talking about a TV show, a movie, or some other recorded event, then more negotiations and much more money–called a synchronization license– would have preceded any right to play the music.

So, where are we? As economists, our concern is intellectual property. Similar to a tangible good, the songs we create belong to someone. While the law determines for how long and entities or people say what they will charge, the creation is someone’s intellectual property. And, for that reason, we have more incentive to innovate.

Econlife Quiz: Do You Know the Economics Behind the Olympics?