Looking at the Southwest Effect

In Texas, during July, 1971, Southwest launched its first flight. Now operating from more than 100 airports across the U.S., the airline has influenced almost every market that it entered.

In 1993, the Department of Transportation called it the Southwest Effect.

The Southwest Effect just refers to the airline’s impact on other carriers. When Southwest and other Low Cost Carriers enter a market, fares drop and passenger activity increases.

With the blue bars displaying the traffic increase and the red, the fare decrease, you can see that the Southwest Effect is still here: 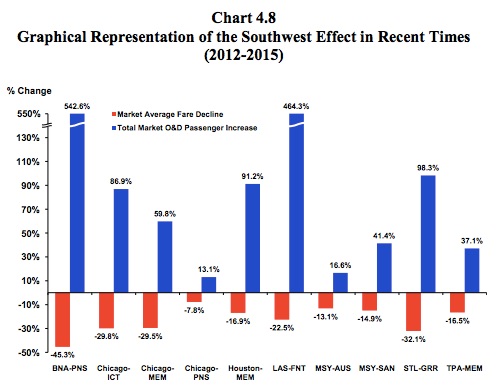 More specifically, these are some numbers for Chicago. To and from San Francisco, Southwest brought fares down by 28.6% while passenger traffic went up 41%. O&D refers to Origin and Destination: 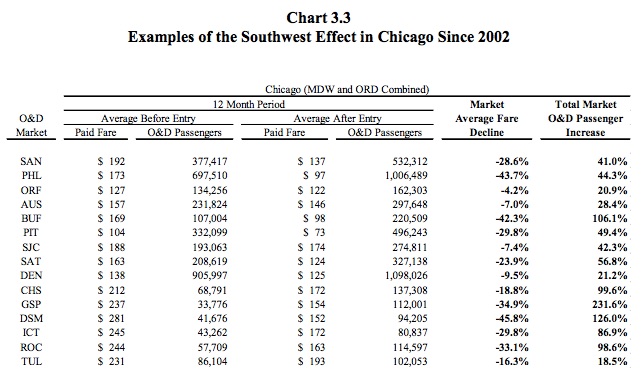 But how do they do it?

According to a July 2017 paper, Southwest has a recipe with just five ingredients:

Using point to point, Southwest did not copy the legacy airlines’ hub and spoke model. Point to point helped them achieve a “ten-minute turn” for smaller planes. This fast turnaround meant planes were in the air generating revenue, not on the ground.

In addition, because they flew just one kind of aircraft (a 737), maintenance and flight crews could be more standardized. Meanwhile, buying one kind of plane gave them some purchasing leverage.

2 and 3. Product Simplicity and Frequency

For passengers, coach was the only alternative. You got a free snack, typically some nuts, and no seat assignment. (Interestingly, the no assignment approach is fastest when boarding.) Also, they made sure to schedule many flights. High frequency was supposed to give passengers more alternatives (and to shock competitors) when Southwest first entered a market.

Most crucially, Southwest typically charged substantially less than other carriers. Basing fares on cost rather than what the competition charged, they wanted to attract the people who had been using cars, trains and buses.

Southwest’s fares are way below the legacy carriers’ fares: 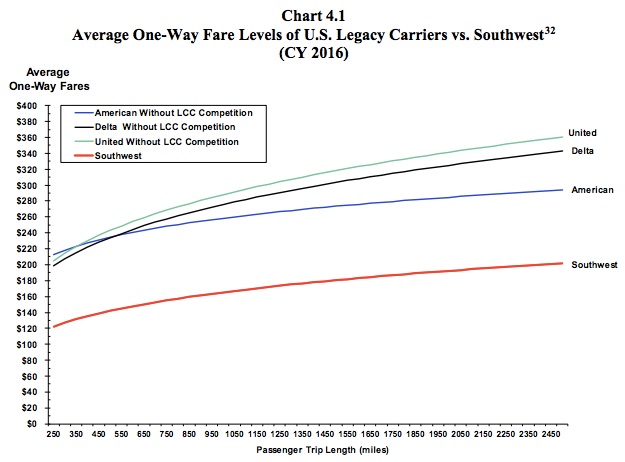 Distinctively friendly and funny, the Southwest employee brought humor to a flight:

Because the airline industry is dominated by just United, Delta, American and Southwest, we could call it an oligopoly. To see the competitive market structure though we also need to look at individual routes. And there, because of the Southwest Effect, we find price competition that is not necessarily characteristic of oligopoly.

My sources and more: Thanks to the NY Times for yesterday’s airline industry article. However, for the real picture of the Southwest Effect, this paper is the gold standard. On the other hand, just to enjoy yourself, do listen to this How I Built This podcast.

Please note than unless otherwise indicated, all visuals are from “Public Benefits and Private Success: The Southwest Effect Revisited.”