#TBT: Today we look back to when we had no cellphones. Yes, I know cellphones brought so much to our lives. But still, there are some things that I’ve missed… 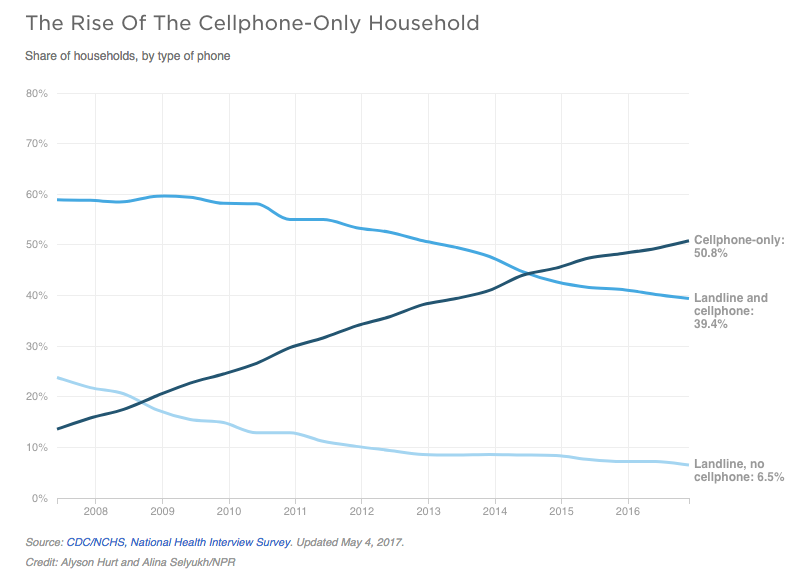 Surprisingly, the source of the cellphone data is the CDC (Centers for Disease Control and Prevention). With a National Health Survey that mandates face-to-face contact, they quickly realized that their landline calls omitted vast numbers of people. By expanding their data base, they became the government agency that tracked cell phone usage.

They also discovered that the first people who switched to cellphones had different health profiles. They were the risk takers who drank and smoked more. Younger and earning less, they also were more likely to be uninsured.

The Upside of the Landline

At this point, I started to wonder how landline use affects a household. Totally unscientifically, I asked several friends and wound up with the following:

You can see that (my friends and I believe) the landline forced family members to cooperate and connect. And that is why I look back on it fondly.

If we rewind to the world before 1984, AT&T had a telecommunications monopoly. Increasingly though, new technology made it tough to decide the boundaries of their power. Yes, their equipment carried the voice. But what about carrying data? Could other firms sell peripheral devices? Could a completely different device transmit voice?

The questions accumulated and technology progressed until the unthinkable occurred. On January 1, 1984, a U.S. court said that AT&T had to be divided into multiple companies. After almost a century as a government controlled monopoly, AT&T became many smaller firms. For the first time, those new companies had to worry about competition from everyone else.

Moving to the left on a competitive market structure scale, firms decrease their size and pricing power. Meanwhile, their market entry and exit become easier:

We could say that the change in market structure helped to nudge the landline out of our lives.

My sources and more: As did I, do start with this NPR overview on the CDC’s study of cellphone use. Then, for more on the AT&T break-up you might look at my competition chapter in Econ 101 1/2–soon to be published online.

Lighting Up Our Lives

Where Smartphones Have to be Clever