Aged in tequila barrels, the beer also has some tequila and lemon flavors.

But because it’s not really tequila, Mexico’s CRT (Tequila Regulatory Council) might sue. Why? Because like Champagne and Parmesan, tequila is a protected name that refers solely to its Mexican producers.

The Deal that Protects Tequila

In multiple trade agreements, Mexican tequila has PDO (protected designation of origin). Explaining PDO status, the EU says that the procedures and the places must be specified. As a result, people know what they are getting. With Mexican tequila, they know the plant is the Blue Agave and the place, five Mexican states. 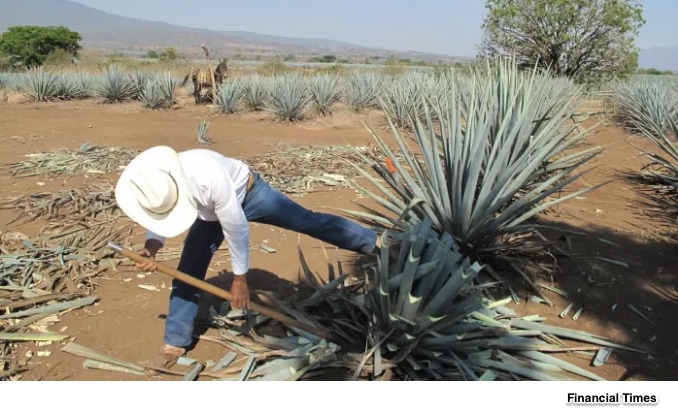 And that takes us to Heineken’s Desperado.

Long associated with cheap shots at wild parties, tequila’s makers are now trying to take it upscale. The new image is the $100 shot that has been aged for 34 months in French Sauterne barrels. The taste? “Complex notes of dried fruit, honey, and citrus.”

Heineken’s Desperados is all that tequila no longer wants to be. As CRT’s director-general told FT, “We cannot permit someone unscrupulously to affect tequila’s prestige. Either they take the word tequila off it, or they put some tequila in.” Otherwise they could wind up in court.

In alcoholic beverage markets, Mexican tequila makers would find it difficult to compete against Heineken and Anheiser Busch. But with PDO, they get the competitive perks that accompany monopoly power.

On a competitive market structure continuum, a rightward move gives tequila producers the pricing power to charge $100 for a shot:

My sources and more: Seeing the tequila story in Quartz, I knew we were talking about much more than beer. My path started in Mexico with CRT. Then, the possibilities were endless. While Slate had the EU legalities, thrillist.com described the expensive tequila shots. I also recommend older econlife posts on Parmesan and Brexit. Finally, this FT article had it all but is gated.

How a Social Score Gets You China's Goods and Services