What do Polish Pretzels, Parmesan Cheese, and Champagne Have in Common?

Polish pretzels sound delicious. Called “obwarzanek,” they are round, have a hole in the middle, are boiled, then baked, and can be sesame, poppy, salt or cheese. Although they resemble a bagel, there is one big difference. They have an EU trademark, a “Protected Geographical Indication” (PGI).

Quartz described how they are made:

“The dough rings are plunged into boiling water for five to 10 seconds and yanked back out. Then they’re doused with sesame seeds, poppy seeds, grated Parmesan or rock salt, and placed in an industrial oven to bake until, as the official rules state, they’re ‘light golden to dark golden or light brown with a distinct sheen.’”

Including Parma ham, Dutch Gouda and Champagne, the list of products that claim the privileged PGI status goes on for pages. The EU believes they help consumers and producers: 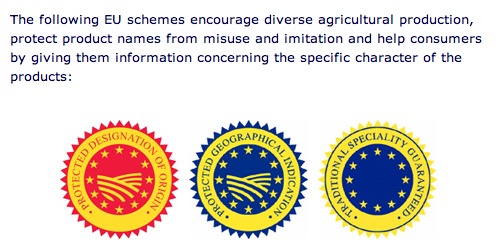 Now though, because PGI has become a trade issue at the US/EU free trade talks in Brussels, they might be a problem for Errico Auricchio. A cheese maker who emigrated from Italy to Wisconsin more than 30 years ago and started BelGioioso Cheese Inc., Mr. Auricchio calls his cheese Parmesan. The EU says that only cheese from Parma, Italy can be called Parmesan.  That would mean the shaker (that does not really taste like Parmesan) called Kraft Parmesan and Wisconsin Parmesan would have to find a new name.

Does that also mean that bologna will not be bologna unless it comes from Bologna. But, what to call it?

You can see the reason the EU wants to enforce its PGI status. From monopolistic competition among many small producers, the EU trademark protection moves the product to the right along a competitive market structure continuum, closer to monopoly and the price making capacity that monopoly endows.

Sources and resources: H/T to NPR’s Planet Money for alerting me to the Parmesan uproar. From, there, I moved to articles from Quartz, the Daily Mail, and Europa, all of which I recommend.

What We Sacrifice for Pothole Patches