The Athletic Programs That Score High for Gender Bias

Assume for a moment that you are looking for a new head basketball coach at your university. The person who wants the job has two NCAA titles, an Olympic gold medal and is one of three college coaches to have had 1,000 career game wins.

If that person is a woman, does it matter?

When South Carolina plays Mississippi State this evening for the NCAA women’s title, we will have a female coach (at South Carolina) and a male. However, that 50/50 ratio is not typical of the gender balance among college coaches.

Graded by the Tucker Center for the proportion of female coaches in their athletic programs, South Carolina got a C and Mississippi, a D.

The NCAA called the declining proportion of female coaches from 1972 to 2014 a downward slide: 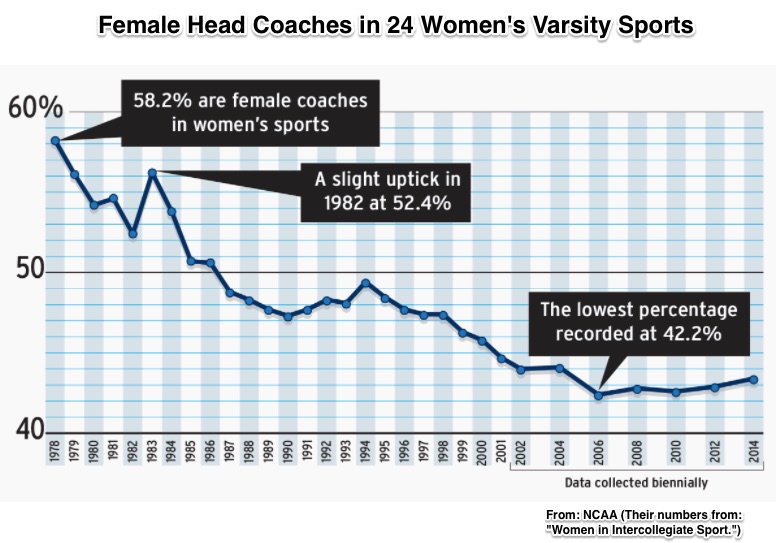 The result of the slide:

Based on data from the past two years, 86 NCAA institutions (96 head coaches) got a gender bias grade from the Tucker Center at the University of Minnesota. Their assessment targeted the percentage of women head coaches for women’s teams.

You can see that basketball got a B:

But with no A’s or B’s, the Conference grades would be considered unacceptable by most students:

We could say that the turnover trends are equally disheartening:

Seeing the prevalence of gender coaching bias, I recalled what female musicians had experienced during auditions. The discrimination was considerable until the auditions became gender blind. The glass ceiling started to crack only when all musicians played their instruments behind “closed doors” that hid their identity. Until then, a reservoir of talented human capital had been underutilized.

And that takes us back to where we started. The person with two NCAA titles, an Olympic gold medal and 1,000 career game wins is Stanford basketball coach Tara VanDerveer.

My sources and more: Including past and present data, the NY Times had a good female coach overview. But if you want to look at all of the numbers and institutions, I suggest the NCAA, acostacarpenter.org, and especially the Tucker Center.

An update: South Carolina won the national championship this evening, 67 to 55.

Understanding the Big Numbers in the Federal Budget