Why Major League Baseball Has a C+ Gender Grade

A year ago, the San Diego Padres interviewed Kim Ng. A University of Chicago graduate, she started her baseball career as a White Sox intern and then worked for the Yankees from 1998 to 2001. Her baseball background includes 13 seasons as an assistant general manager during which her teams made it to the playoffs, League championships and the World Series. Since 2005 she has sought to be the General Manager of the Dodgers, Seattle Mariners, Padres and the Angels. While the media said that she was highly qualified, each team said, “No.”

Where are we going? To see where baseball limits its human capital.

The University of Central Florida has a Gender Institute that publishes a report card on race and gender for major league sports. While women fared rather poorly everywhere, Major League Baseball was particularly dismal. With a C/C+ grade, MLB’s teams employed relatively few women in management. (All tables are from “The 2015 Racial and Gender Report Card: Major League Baseball.”)

There are no female General Managers/ Directors of Player Personnel in MLB.

For coaches also, the number was zero.

In the top slot, still no woman who is a CEO/President of a team. However, the New York Yankees, Washington Nationals, Colorado Rockies and the Chicago Cubs each have women at the top. Three female Steinbrenners are Yankee Vice Chairpersons, among the the Washington Nationals Principal Owners are women in the Lerner family, Laura Ricketts is a co-owner of the Chicago Cubs, and Linda Alvarado is one of the Rockies owners. 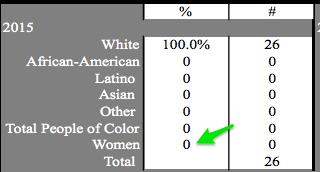 To find higher numbers, we need to look at vice presidents. And yet, with 65 female VPs out of 376 among 30 teams, the female presence is relatively small. 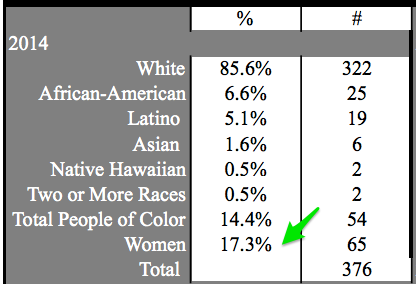 When you eliminate women from your supply of human capital, you are diminishing your team’s potential talent.

Paying More at the Gas Pump

The Reason for Endless Shrimp