The Dangerous Side of Economics

Greece’s chief statistician could again wind up in jail.

Brought in during 2010 to overhaul the Greek statistics office, Andreas Georgiou, a former IMF official, concluded that his country’s deficit was bigger than had been reported. While an initial revision inflated the deficit from 3.7 percent of GDP to 12.5 percent, Mr. Georgiou took it further to a whopping 15.8 percent–a record eurozone level.

As you know, the impact on the country was calamitous. Georgiou’s revised deficit and GDP figures necessitated an unheard of discipline in order to secure the bailout loans it needed from the international community. Gargantuan government spending had to be cut, government employees fired, government pensions slashed.

Although everyone knew they were fudging the numbers, still the Greek government used them to show they met eurozone requirements. In 2011, because Georgiou injected some reality, he was brought to court and accused of “breach of faith” and aiding the creditors. Or as he said, “I am being prosecuted for not cooking the books.”

But they did not prosecute him, he remained at the statistical office, and the controversy seemed to fade away…until now. With a new left wing government, the courts have again contacted him. Several weeks ago, he was summoned by prosecutors, a sign that he could be tried in court.

All because of the deficit. 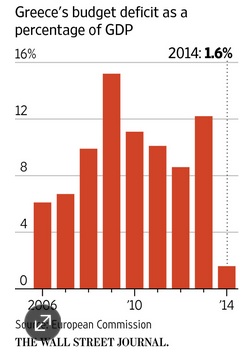 The current relevance of Benford takes us to Greece. Providing a clue that something was fishy,  just before Greece joined the euro in 2001, its deficit statistics deviated considerably from Benford’s Law.

And finally, I never can leave a story about Greece without Merle Hazard’s “Greek Debt Song.”