Located near the Italian Alps, the 1500 residents of Verrua Savoia live in clusters that dot 20 miles of hills and valleys. Idyllic sounding, the terrain has delayed their access to high speed internet. One resident said buying on eBay was tough because it took too long to send a bid. But bringing fiber optics to their front doors was so costly that the Italian government and private firms had not attempted it. Instead, as an eight year nonprofit project, a local university gave the community their high speed service.

Actually, in Italy, cost was only one barrier.

Far below the EU average, 34 percent of individuals in Italy have never even used the internet and only 56 percent are regular users. While more than half of all Italians have access to a high speed connection, only ten percent have even indicated that they are interested.

One purpose of the EU was to create a larger economic area that would facilitate the movement of labor and capital and now, an information infrastructure. Looking, for example, at the difference between Italy, Germany, Greece, Portugal and Finland, we can hypothesize that EU internet integration has been constrained (or fueled) by the local culture.

Here is how Italy’s connectivity commitment compares with her sister EU countries:

Having looked at Italy, I got curious about other EU countries. 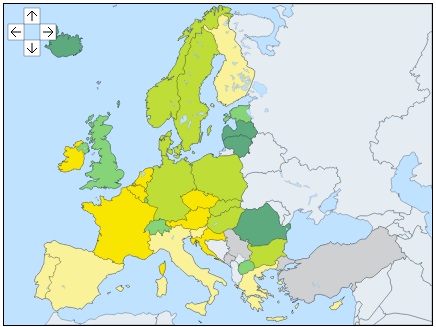