Where are we going? To the implications of inequality.

Stress and the Tsimane

When researchers visited the Tsimane, they found an egalitarian pre-industrial farming and fishing community. In villages with 30 to 700 people, decision-making is egalitarian and the economy is based on farming and fishing. Just like their parents and grandparents, many villagers plant plantains, rice and sweet manioc, and fish in the Maniqui River.  With some infants dying from overexposure to the sun as their families worked in the fields, their young children have a high mortality rate.

Location of the Tsimane: 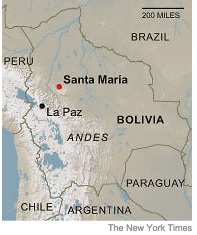 You can see why the Tsimane attracted researchers. Separate from modern society (except for a few who have cell phones and motor cycles), they are ideal for observing  universal medical issues like diet, stress, and aging.

In one study, looking at four villages, researchers created a metric to assess the impact of status on 200 men, aged 18-83. Since all had equal wealth, they wanted to see if differences in stress-related physiological variables related to unequal political status. Their answer was yes. As influence dropped, other measures of stress like cortisol levels rose with less influential men even getting more respiratory infections.

Described in the May 15, 2001 issue of The Annals of Internal Medicine, researchers analyzed mortality statistics for 1649 actors and actresses by comparing Academy Award winners, nominees and other cast members of the same sex in the same film who were born during the same era. Not only did they conclude that winners had approximately four extra years of life but also, stars with multiple Academy Awards lived six years longer (called a six year “survival advantage”) than performers with no awards.

You can see below how the causes of death compare for winners and nominees.

So, whether we think the study is valid or not, what is all of this about?

In a 2010 NY Times column, economist Robert Frank tells us that the top 1% of earners moved from an 8.9% share of total income to 23.5% between 1976 and 2007. Then, he also points out that counties with rising income inequality experience higher divorce rates, more bankruptcies, and longer commute time. His point? Because “…greater inequality causes real harm…” more income equality through higher taxes is a valid goal for our leaders.