Through an article on why most magazines in doctors’ waiting rooms are old and uninteresting, the British Medical Journal (BMJ) gave readers some smiles in its Christmas issue.

As the authors explained, “We searched Medline, Google Scholar, and grey literature for studies on missing magazines and on waiting rooms, but despite finding information on the design of waiting rooms, satisfaction with service based on the waiting room experience, and other waiting room related topics, there was nothing on the disappearance of magazines.”

Because of the number of complaints and the dearth of research, they believed their topic had sufficient medical significance to render some investigation.

Their hypothesis? Either the good magazines were not placed in physicians’ waiting rooms or they were disappearing.

Gossipy magazines disappeared 14.51 times faster than the “non-gossipies” and on a given day the disappearance rate was 1.32 magazines. After 31 days, even the Economist had disappeared from the waiting room.

Here they use a “Cox proportional hazard model” (???) to display their results: 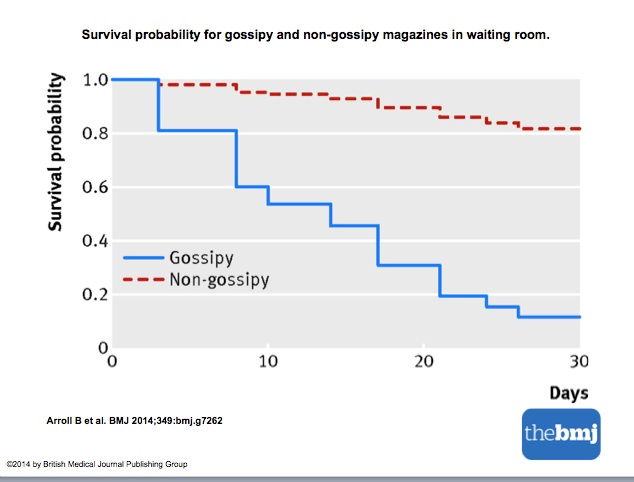 Telling about a communal pasture in Switzerland, Dr. Ostrom explained how farmers avoided overgrazing by creating voluntary rules. “What we have ignored,” she said after her Nobel Prize was announced, “is what citizens can do . . . as opposed to just having someone in Washington or at a far, far distance make a rule.”

Perhaps Dr. Ostrom would have seen another problem of the commons in doctors’ waiting rooms.