The year was 1991 or 1992. Noticing that ratings rose when it played an all-holiday sound track, soft rock station 99.9 KEZ, Phoenix stuck with Christmas. The trend caught on and now, stations try to judge the right time to start wall-to-wall holiday music. According to a songs programmer, no one knows exactly what the date will be. Stations just have to be ready because a snow storm, some global event or a competitor could trigger the beginning. This year, on October 24th, the first station flipped the Christmas switch.

Where are we going? To the Dow of Christmas Music.

In 1884, the first Dow Jones Average was composed of just 11 stocks, all railroads, and gradually grew until 1928 when the list expanded from 20 to 30, its current total. A list of large, leading firms, the Dow Industrial Average provides a statistical overview of market activity.

Fivethirtyeight’s lead life style writer called the following graph a Christmas Dow because, like the Dow, it provides a statistical overview of market activity. Here though, instead of top businesses, we are looking at top Christmas songs. 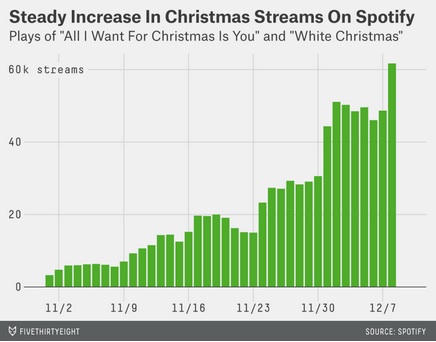 Sure enough, when I went to my local soft rock station from iHeart Media, this (below) was their “Dow” top ten of the week. Continuing, I saw that “All I want for Christmas is You” was #31 and “White Christmas,” #37:

Just like the Dow, whether looking at Billboard, iHeartMedia or Spotify, we can see that the top Christmas holiday songs have a market of millions of radio and streaming listeners, they remain on our list for multiple years, and occasionally, they are replaced by newcomers. And, as a major source of ad and streaming revenue, they are big business.