Why There is Less Marriage

Where are we going? New attitudes and economics have changed marriage markets.

More of us believe that it is okay not to be married.

Pew asked survey participants whether they believed that society is better off with marriage. While the response was almost evenly divided, the age split was not. Younger adults tended to say that marriage was not crucial for society while those who were older disagreed. All though did agree that people who were planning to share an entire life together should tie that knot. 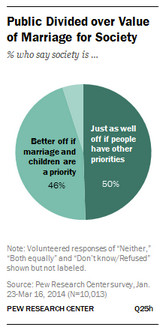 So, not only do we have less pressure from society to get married but also economic changes have transformed the incentives. Because of more education, higher wages and birth control, women can get married when they are older. Consequently, they are waiting longer and expecting more from the men they meet.

The problem, as you can see below, is that fewer men have what women want. 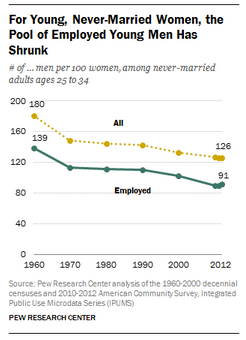 But it does depend on the city:

This takes us to supply and demand.

Considering that we have a lower supply of qualified men and we have women who have become “more valuable” because of higher pay and more education, supply decreases, demand increases and the equilibrium price for marriage rises.

Explained by Nobel economics prize winner, Gary Becker (1930-2014), forget love and marriage. Instead think utility functions. People marry because they expect to “raise their utility level above what it would be were they to remain single.” Defining utility as welfare, economists could say that the marginal utility of marriage (each extra unit of welfare) has decreased.

The Ebola Impact on Economic Health

There Is No Such Thing as a Free Charge