A Solution for Too Few Doctors: More Patience

Months long delays and long distance travel have become typical Affordable Care Act (ACA) problems for Medicaid patients. The cause, according to a government report, is unenforced patient accessibility standards. Especially because eight million new enrollees need care, the problem is a big one.

In a new report from the Department of Health and Human Services, the inspector general said many states were not doing a good enough job providing access to care through Medicaid. While he was referring to “network adequacy,” we need to go to supply and demand.

But first…what is Medicaid?

Because each state implements Medicaid with federal dollars and its own money, the state further defines who gets the aid and what they get. Consequently, if you know one [Medicaid program]…you just know one. There are 49 others + D.C.”

Then it got even more complicated when, after the ACA mandated a bigger Medicaid umbrella for all states, the Supreme Court said, “Let’s make it optional. States can expand how the law specifies; or they could not extend, and just keep the existing program.”

So far, according to Kaiser Health, 27 states and DC have expanded their Medicaid accessibility:

So, with the Congressional Budget Office estimating that by 2016, one-quarter of all Americans will be on Medicaid at some time, let’s see why it has accessibility problems.

Supply and Demand and Medicaid

When we read that Medicaid patients wait for months for an appointment, it is all about supply and demand.

On the supply side…

On the demand side…

With federal guidelines mandating no more than 3,500 people for each primary care provider, in just six years, 20 percent of all Americans could have an insufficient number of primary care physicians.

I guess we could say that our healthcare system is sick.

The Bottom Line: An Economic Diagnosis

Here is the economic diagnosis. We have less of a doctor supply, more demand for doctors, and a price ceiling that creates shortages. 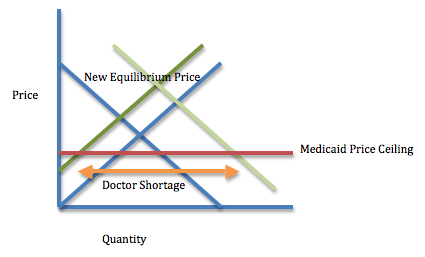