When you legalize marijuana, there’s a lot you cannot predict.

One reason that Colorado voted to legalize recreational marijuana was the tax revenue. The pro-marijuana lobby even had a jingle: “Jobs for our people. Money for schools. Who could ask for more?” Projecting $100 million in taxes with the first $40 million going to school construction, legislators expected a revenue bonanza. Even with a 30% tax rate, they seemed to think demand would be inelastic.

But legislators were surprised. The black market was still active and medical marijuana, with its lower tax rate, had booming sales. Consequently, between January and June 2014, Colorado’s coffers received 46% of the marijuana tax revenue projected by the group that advises the legislature.

Now though, with recreational sales climbing and medicinal marijuana seeing less demand, tax revenue might increase. But no one is saying $100 million. 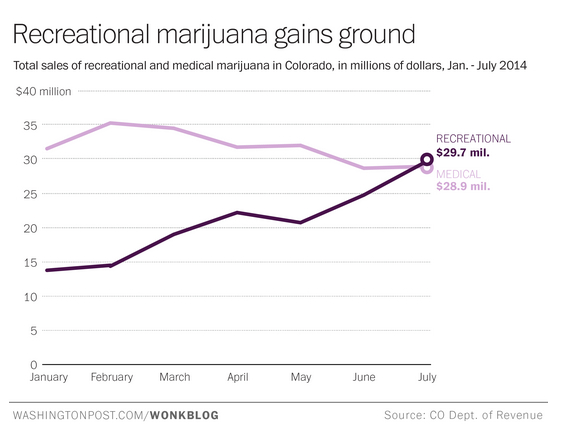 Curious about whether legal pot production in Colorado is included in national GDP totals, I called the phone number listed on the press release. So, I was pleasantly surprised when Lisa Mataloni answered the phone—no voice mail, and no hierarchy to climb through to get a person. Her answer was that marijuana will be counted if and when marijuana businesses are among those surveyed by the BLS for GDP data. She implied that right now, they probably have not yet trickled in.

So, although GDP is our record of the goods and services we produce, marijuana is not included.

Unpredictable human behavior makes economic forecasting more of an art than a science. (That takes us to behavioral economics but you can read about that here at econlife.com.)

A Solution for Too Few Doctors: More Patience