When Shoppers Have Too Many Choices

On my romance comedy list, When Harry Met Sally is #1.

As recent college graduates, Harry and Sally first meet when they share a rather contentious and very funny drive from the University of Chicago to New York. Stopping for a meal, Harry selects the number of an item on the menu. Sally, though, had to have her chef’s salad with oil and vinegar on the side. Then, for her apple pie à la mode, she wanted the pie heated, strawberry ice cream instead of the vanilla, and only real whipped cream.

This was the scene. For a smile, do take a look:

In Sally’s life, everything–even a slice of pie–has variety. Somewhat similarly the variety in each of our lives is multiplying. And that is not necessarily good.

One result has been an increase in niche consumption that could make many people happy. Like Sally, they can select precisely what they want. Also though, it could depend on whether you are a maximizer or a “satisficer.” Maximizers want the best decision. Less demanding, “satisficers” are happy with things being good enough.

Our Bottom Line: The Paradox of Choice

In “Do Shoppers Have Too Many Choices?” we are told that consumers bought less after a restaurant delivery platform multiplied the options. The researcher concluded that it became increasingly difficult to navigate the options.

While small (the y-axis max is 2.5%), more variety does increase consumer satisfaction: 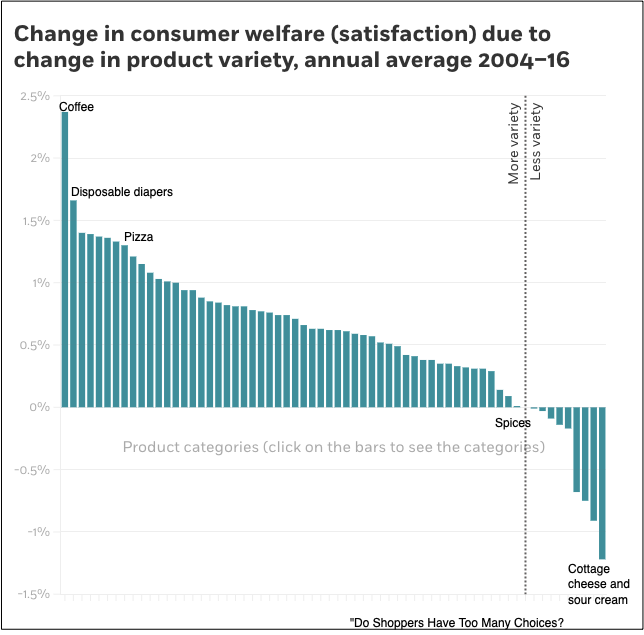 Still, the paradox emerges when more is less. We pay a biological price for making decision after decision. Depleted, at some point, our brain looks for shortcuts and tries to do less.

My sources and more: Thanks to the always interesting Timothy Taylor for inspiring me today. From there, this paper explored the vast territory surrounding consumer choice while the Decision Lab discussed the paradox. And this NY Times article on ice cream cones contradicted everything!  Finally, if you just want to see which Lay’s chips are best, Thrillist has the analysis. Thrillist was also the source of our featured image.

How to Reduce Overfishing and Increase Food Security

May 2022 Friday's e-links: Why We Need to See Why Harry Met Sally