Where Thursday Could Become the New Friday

The policy boosted productivity, loyalty, and morale, and, according to Ford, created more car buyers.

Remembering Ford, today we can ask about the impact of the 4-day workweek and a shorter workday.

From 2015 to 2019, researchers observed the impact of a 4- day workweek in Iceland. Participating businesses ranged from preschools to hospitals while selected government agencies and offices also took part. In all, approximately 2,500 workers provided a reaction to the same pay for less time at work.

The report supported a reduced workweek. Participants said that that they had more family time and less stress. Men helped with childcare and household chores. People reported less burnout and better health. At work, managers said that new work strategies like shorter meetings preserved productivity. Since then, 86% of the workers in Iceland got the right to move to a shorter work week.

The results were quite different in 2016 when the owner of a Swedish biotech firm reduced his 30 employees’ daily hours from eight to six while the pay remained the same. After a month, he switched the schedule back to normal because everyone was more harried. People had a tough time contacting unavailable associates when they needed them. Some stayed later to finish or left the work for their managers to complete.

In another experiment at a Gothenburg, Sweden nursing home, the outcomes were positive and negative during the two years that 68 employees earned full pay for fewer hours. Working five days a week, six hours a day, employees were less stressed, engaged in extra activities with the elderly residents, and called in sick less frequently. However, the missed time added up to $1.3 million (12 million kronor) in pay for the 17 extra employees they needed. So yes, jobs were created but the program was too expensive.

As economists, we can start by looking at how much we work: 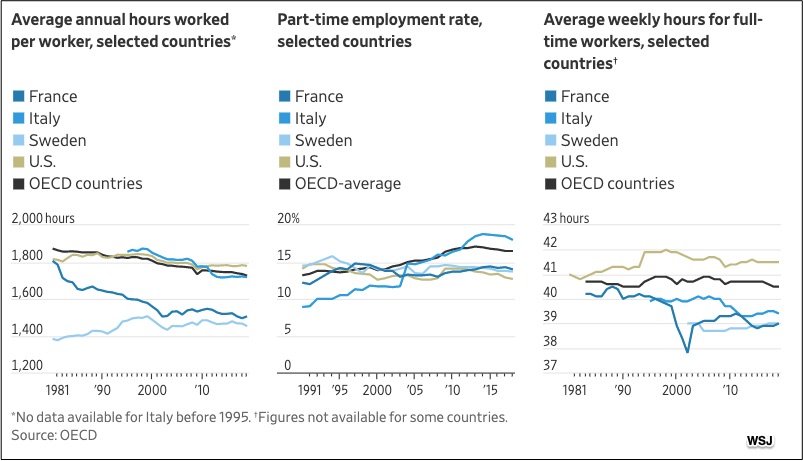 And then, as always, we can return to the tradeoffs that every decision requires. I was concerned that the Icelandic report focused almost exclusively on the 4-day workweek benefits rather than its costs (the sacrifices). In addition, as economists, we should always look at the margin. One 2015 study from the University of Turin found that Italian workers were less productive when the workday dropped below eight hours. But evidence from Germany was the opposite.

You see where we have wound up. Less can be more… but not always.

My sources and more: Thanks to Slate’s Saturday Money podcast (which I always look forward to) for alerting me to the Iceland 4-day workweek study. From there, I discovered these articles from The Washington Post,  The Economist and the BBC. But it was most enlightening to compare this rosy NY Times discussion to the negatives in WSJ. And finally, thanks to Scientific American for giving me the idea for my title.

Please note that several of today’s sections were in a previous econlife post.

Our Weekly Economic News Roundup: From Hot Dogs to Hamilton