Yesterday, on a Virgin Galactic flight, Richard Branson was the first billionaire to enter outer space.

The event reminded me of J.P. Morgan, the Panic of 1907, and billionaire power. Let’s take a look and then return to Richard Branson.

During 1907, financier J.P.Morgan saved the U.S. from a monetary disaster. Including President Theodore Roosevelt, no politician could provide a solution. Neither could any other business person or member of the clergy. Only J.P  Morgan had the power and prestige.

Long before 1907, J. P. Morgan had established his reputation as a financial superman. From funding and restructuring railroads to creating the massive corporations that appeared at the turn of the century, J. P. Morgan had shaped the United States financial landscape for close to half a century. Now, in 1907, the nation turned to him to prevent a debacle that threatened its entire money and banking system.

Our story begins at the Triennial Convention of the Episcopal Church. Having attended the ceremonies and debates, J. P. Morgan returned each day to dispense his business messages from his railroad cars. But, as the end of the conference approached, people observed that Morgan was receiving an unusual volume of telegrams. Soon he said there was a problem in New York to which he had to attend.

The crisis began with a failed attempt to corner the shares of United Copper that resulted in a massive unpaid loan. F. Augustus Heinze had borrowed money from a group of New York banks to carry out his copper coup and now could not pay it back. As a result, the Knickerbocker Trust Company had insufficient cash to satisfy the needs of its depositors.

Rapidly spreading rumors soon sealed the fate of the Knickerbocker Trust Company. After someone tried to take out $2 million, the bank had to close. One source of the problem was a system in which banks, using deposits for investments that produce profits, keep only some of their money on hand. You can see why the system can crash when panic sets in and everyone simultaneously demands a withdrawal.

With Knickerbocker crashing, other bankers worriedly wondered who would be next. The demise of one bank affects another directly through the obligations that both may share and the refusal of depositors to distinguish between the two. Not only is bank failure contagious among the weak, but healthy banks also have cause to worry.

The Role of J. P. Morgan

J.P. Morgan comprehended the potential magnitude of the problem. Upon his return to New York, his library became his command center with reestablishing the liquidity of the banking system, his overriding goal. He knew that the tidal wave of withdrawals could not continue. Banks had to have enough cash to proceed with their normal operations. Meanwhile, tellers were instructed to  count out the money very, very slowly. 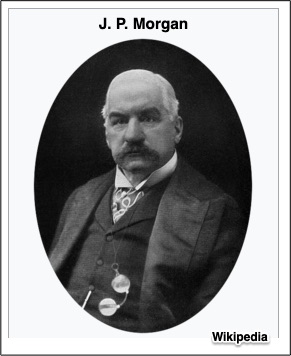 J.P. Morgan’s first move was to supervise an institutional “housecleaning” by removing individuals who engaged in activities that would create bankruptcies at weak institutions. Similarly, Morgan went after the “bears” who would try to profit from the downward spiral. He also sought unity among bank presidents from whom he raised the money they could use to support each other. At the same time, President Theodore Roosevelt’s Secretary of the Treasury arrived with $25 million in government funds.

The New York Stock Exchange was one reason that Morgan needed the cash. When a cascade of selling propelled prices downward, bankers started calling back loans that investors had used to purchase stock. Responding J.P. Morgan amassed $25 million for brokers to borrow. A money post with these funds was set up on the floor of the stock exchange. So agitated were the recipients that one of Morgan’s representatives had his coat torn off.

Then, making matters even worse, the city of New York found itself on the verge of default. Worried about the financial disarray in the city, investors were not buying the bonds that New York needed to sell for current operating expenses. City officials then went to Morgan, hats in hand, looking for assistance. They found relief when Morgan made $30 million (which economists doubt that he even had) available for their use.

Through it all, Morgan reputedly was suffering from a terrible cold, Sucking lozenges, he had doctors spraying his throat, Whenever he dozed, no one dared awaken him. They merely tried to remove his lit cigar from his fingers and then continued their negotiations.

At this point, we could say that Morgan had provided a short-term solution to what would be known as the Panic of 1907. But the long-term implications were even more serious. Here, in 1907, we have the monetary apparatus of the nation being threatened. To whom do we turn? Do we go to President Roosevelt and his appointees? No, instead, the president himself goes to the most powerful moneyman in the land—as do those in trouble and those with the cash to save the situation.

The Panic of 1907 led Congress to conclude that no man, no “monarch of Wall Street,” should be the center of monetary control and salvation. Five years later in 1912, the Congress creates the Federal Reserve System–what might be called a third national bank. Once here, it stayed, and  forever eliminated the Morganization of monetary policy.

Since 1960s communications satellites, parts of our space program have been run by the private sector.

Rather like J.P. Morgan, these individuals’ firms are spending huge money, developing technology, and initiating new industries. Comparing the four men, we can ask if we lean more toward supporting their huge contributions or worrying about their power and influence–one tradeoff among many, that we, as economists, always consider.

My sources and more: Thanks to a CNN interview that inspired this post about billionaire power. Presenting the other side, this space.com op-ed defends the billionaires’ role. My launch images and facts are from BusinessInsider. Most of the Panic of 1907 story is excerpted from my Econ 101 1/2 (Harper Perennial).

Where Thursday Could Become the New Friday

What Central Banks Could Do To Our Cash