Our story starts when a journalist named Rachel gets a call from her mom. The mother is distressed because her supermarket has stopped selling De Cecco bucatini. Even on Amazon, there is none: 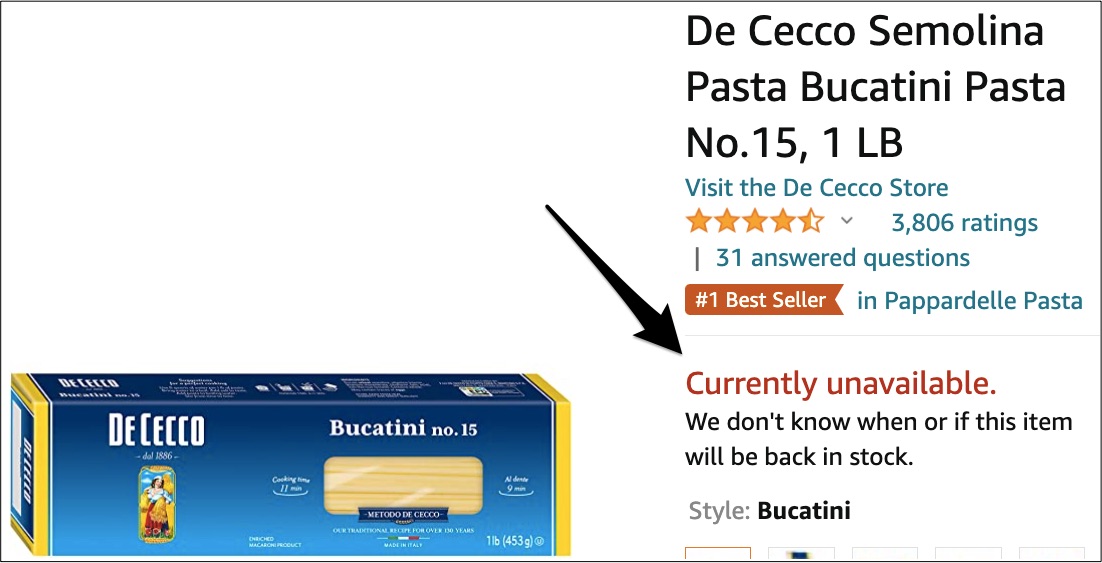 But it gets worse from here.

Rachel says that she and her friends searched the NYC markets. At Whole Foods and Food Town, Key Foods and Brooklyn Harvest, sometimes they found some. But then the shelves were never replenished. Thinking it was a New York problem, they even contemplated a trip to New Jersey.

Soon they realized it was bigger than they thought when Rachel’s mom asked De Cecco where she could find her beloved bucatini. They replied that there was an FDA “hiccup.”

As a journalist, Rachel knew she had to investigate. After De Cecco never explained “the hiccup,” she had more success with an NPA (National Pasta Association) spokesperson. Referring to pandemic production cutbacks, he said the bucatini might have been first because it was tough to make and not among the most popular pastas. Furthermore, people were using it instead of straws. However, when asked about the FDA “hiccup,” the NPA also knew nothing.

At that point, Rachel found an FDA bulletin that had some answers.  On March 30, 2020, De Cecco bucatini was placed on import alert because of a vitamin deficiency. The firm’s pasta has a slightly depressed iron level that does not quite meet U.S. requirements.

The mystery is who reported them? After all, we are in the middle of a pandemic. The FDA has not been focusing on the iron content of bucatini.

Bucatini lovers say their pasta absorbs 200 percent more sauce than spaghetti because of the hole. Calling it “the best long pasta,” Bon Appetit cited its absorption capacity and superior slurpiness.  An economist might call it product differentiation.

In a perfectly competitive market, pasta could have been an undifferentiated product like bananas or Idaho potatoes. Then though, it would have less pricing power and a tougher time with branding. Instead though  we have rigatoni, spaghetti, linguini, orecchiette, and bucatini. Yes, the shapes give pasta makers more market power.

Furthermore, the entire industry tried to distinguish itself from ramen by government enrichment standards that only it would meet. “Big Pasta” made sure a less expensive noodle would become an outcast.

Sometimes, the path to product differentiation can wind up at an unexpected destination.

My sources and more: Thanks to The Indicator podcast for alerting me to the missing bucatini. From there, Grub Street had more detail.

Our featured mage is from Grub Street.

The Special Side of a New Twenty Dollar Bill

Why It's Tough to Turn Around a Big Ship