Where to Find a Higher Minimum Wage

When the minimum wage is on the ballot, usually it’s about an increase.

But not South Dakota.

In 2016, they proposed reducing the minimum wage for employees under 18 years old. Having increased it to $8.55 in 2014, they explained that a younger person exemption (down to $7.50) would help them find jobs. Called Referred Law 20, the referendum resulted in a resounding NO.

Meanwhile, the trend to a higher minimum wage continues.

Florida’s Amendment 2 passed in this month’s election. With a 61 percent yes vote, it will gradually elevate the state’s $8.56 minimum wage to $15 by September 30, 2026. In addition to Florida, 28 states and Washington D.C. have changed their minimum wage laws since January 2014.

At $15 now or in the future, Florida joins Massachusetts, California, Connecticut, and other dark blue states:

At the same time, certain cities and municipalities have mandated their own minimum wage. As of May 2020, below, you can see that Seattle, at $16.39, tops the cities list. Then, San Francisco with a $15.59 minimum and San Jose, $15.25, come next. Others though could not make that decision. Called pre-emption, 28 states prevent localities from exceeding the state minimum: 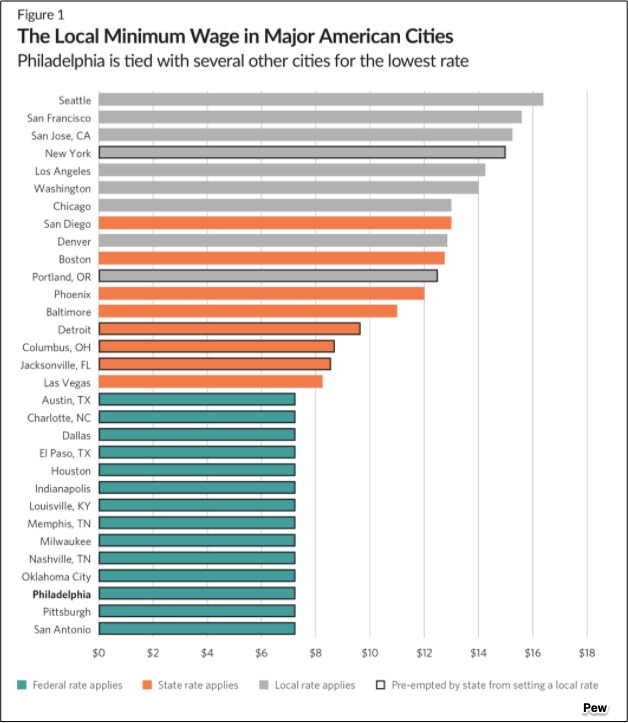 Concerned that the $7.25 federal minimum wage ($2.13 sub-minimum for tipped workers) has not been changed since 2009, the U.S. House of Representatives passed a bill that would lift the federal minimum wage to $15 by 2025. In a corresponding report, the CBO concluded that the increase would boost what 27 million Americans take home. It also said that 1.3 million jobs would be lost.

Many economists would disagree with the traditional price floor showing the minimum wage. They hypothesize that there is more room above equilibrium before we lose jobs. The epi believes that the  CBO report was too negative when it said that 1.3 million could become jobless.

And finally, returning to our featured image from Pixabay, in “What If,” Randall Monroe’ tells us that people who earn the $7.25 federal minimum wage make a nickel every 25 seconds. Paid in pennies, they would have to drag home 30 pounds of pennies each day. Alternatively, if they received a mixture of loose change, it probably would fill up a plastic water bottle. And, if the change in that bottle rained down on them, they would not be injured but would be buried within an hour.

My sources and more: The South Dakota story propelled me toward other similar tales. After finding the results of their referendum, I went to the Economic Policy Center (epi) for a summary graph of the states and to Pew for selected cities. Then, for more, CNBC had a good up-to-date summary and the Congressional Budget Office took a close look a year ago, Finally, econlife described a Seattle study and one mall with two minimum wages.

Please note that parts from today were in a previous econlife  post.

The Cold Chain Links for a COVID-19 Vaccine