As the first nation to be hit by the coronavirus and the first to lock down, now China is the first to begin to recover. We can ask though if their 4.9 percent third quarter GDP growth rate is accurate.

During the past year, China’s official GDP growth rate has gone down and then up again. The numbers reflect a comparison with the same quarter last year:

Meanwhile, the results from alternative indicators that include satellite nighttime lights, the Le Keqiang Index, and import numbers from exporting countries have been mixed. These domestic and import statistics show that the official figures from 2007-2013 were overstated. More recently, Liberty Street suggests there were longer slowdowns and shorter upswings.

Below you can see the difference between the Li Keqiang Index and official numbers:

As for now, the official figures and the alternative indicators appear remarkably close. But still economists believe that second and third quarter growth might not have been quite as strong as the official version: 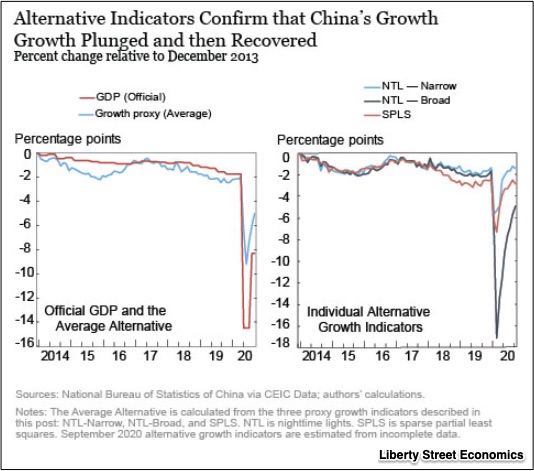 The Liberty Street economists at the New York Fed are concerned that any domestic and global boost from the Chinese economy could be short-lived. Composed of  high debt, a lower return to capital, and a shrinking working age population, economic headwinds will likely shrink the Chinese growth rate.

Nighttime lights are handy barometers of relative growth changes. Below, they show the difference between economic activity in 1992 and 2013:

However, the economists who wrote “Illuminating Economic Growth” warn us that satellite data is most useful for middle income nations. The reason? Low income nations tend to be too dark for comparisons and those with high income have become bright almost everywhere.

My sources and more: I thank Liberty Street Economics for returning me to Chinese economic growth. From there, The Washington Post had more as did Liberty Street in a longer China report.

Where to Find a Higher Minimum Wage