These are the cities: 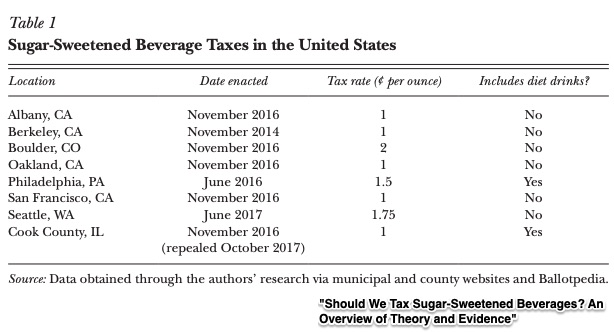 These are the lower income households that are most affected by the tax: 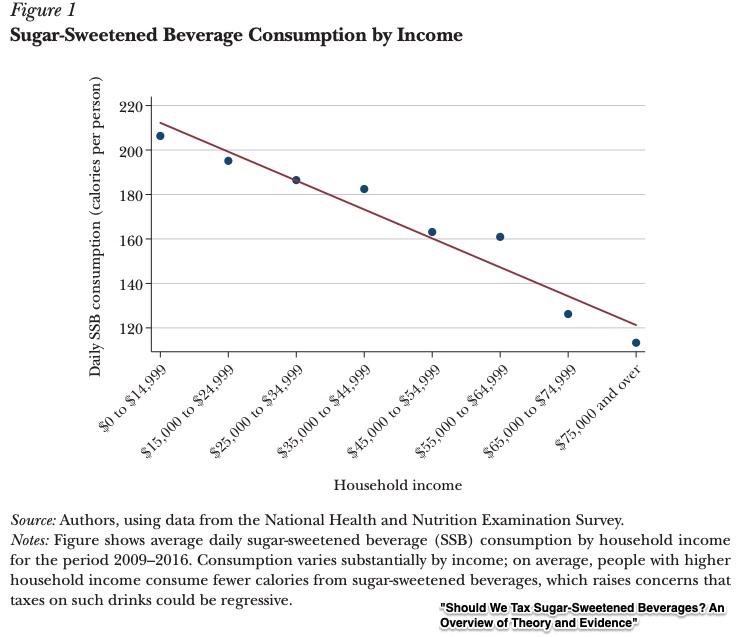 From here it gets more complicated.

A typical sugary drink tax starts with distributors who then pass all or a part of it to retailers. Some stores include the tax in the labeled price while others charge it at the register. At this point, the impact on the consumer varies. It depends on household income and whether a nearby community has also levied the tax. It is also possible that individuals will substitute non-taxed sugary items for the ones they stopped buying. We can even ask if stores have to close because of diminished sales.

With so many variables, how can we decide if the tax is a good one?

In the newest issue of the Journal of Economic Perspectives, several economists suggest we can start by considering internalities and externalities. Simple stated they just mean looking at how sugary drink consumption affects individuals (alone) and everyone (together).

Called an internality because people bear the cost of their own consumption decisions, here we have “time-inconsistency” issues. Many of us prefer the short term pleasure of a sugary drink rather than the long term benefit that restraint provides. Taxes could nudge people toward the long-term benefit.

Defined as the impact on uninvolved third parties, the negative externalities related to excessive sugary drink consumption affect everyone’s healthcare costs by increasing the incidence of weight gain, type 2 diabetes, and cardiovascular disease. But also we can generate positive externalities by spending tax revenue on programs that assist populations most affected by sugary drink consumption.

Where does all of this leave us? I always like to return to Benoit Mandelbrot. As the mathematician who told us that the length of the British coast is infinite, he said that when you see it from a distance, it appears to be an unbroken measurable line. However, the closer you look, the longer it gets. There are small inlets that have tinier indents. They go on forever, getting smaller and smaller.

A sugary drink tax is similar. The closer we look, the more we see.

My sources and more: The Journal of Economic Perspectives has the most up-to-date analysis of sugary drink taxes. From there, the perfect complement was this paper’s look at the Boulder tax.

Why Italy Is Selling Some Palazzos

The Downside of Vegan Leather