Why Italy Is Selling Some Palazzos

A for sale sign might be perched outside the palazzo of San Salvador near the Rialto Bridge in Venice. Priced at 28 million euros, this former monastery dates back to the 12th century. Other properties on the market include the castle of Civitella Cesi in Viterbo near Rome, some forts, and maybe a lighthouse.

All are being sold by the Italian government. In debt for 2.3 trillion euros, it needs some money.

Italy has a debt equal to 130% of its GDP. At 180%, only Greece is in worse shape. But because Italy is the fourth largest economy in Europe, what its owes is particularly worrisome.

For Italy, so large a ratio is nothing new. When it joined the eurozone in 1999, the number was 126%. Then though, the Italian economy was growing and deficits–the amount by which spending exceeds revenue–were low. Now, growth has been close to zero, unemployment remains near 10%, and the commitment to cut is dubious.

Recently, the Italian government tried to roll back the increase in the retirement age to 62 from 67 for people who have 38 years of pension contributions. They say it should open up jobs for younger workers and thereby stimulate the economy. Opponents expect high pension expenses. Except for Greece, Italy has the EU’s highest pension spending: 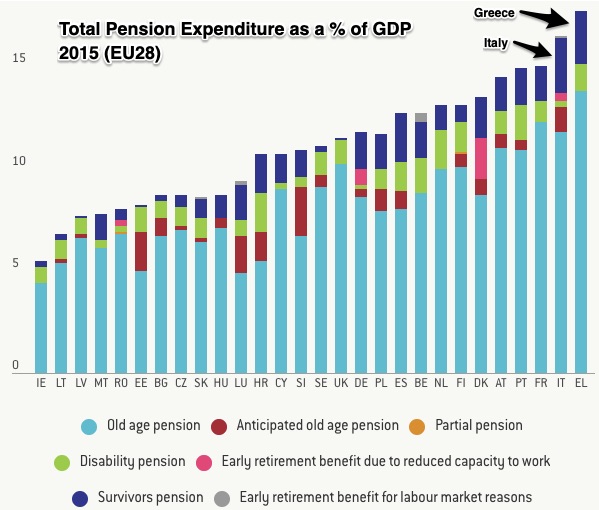 You can see why Italy’s debt would set off the EU’s alarm bells. Responding, the Italian government indicated it wants to spend more so it can grow more. It had a recession, trade tension, and Europe’s slow growth to cope with. 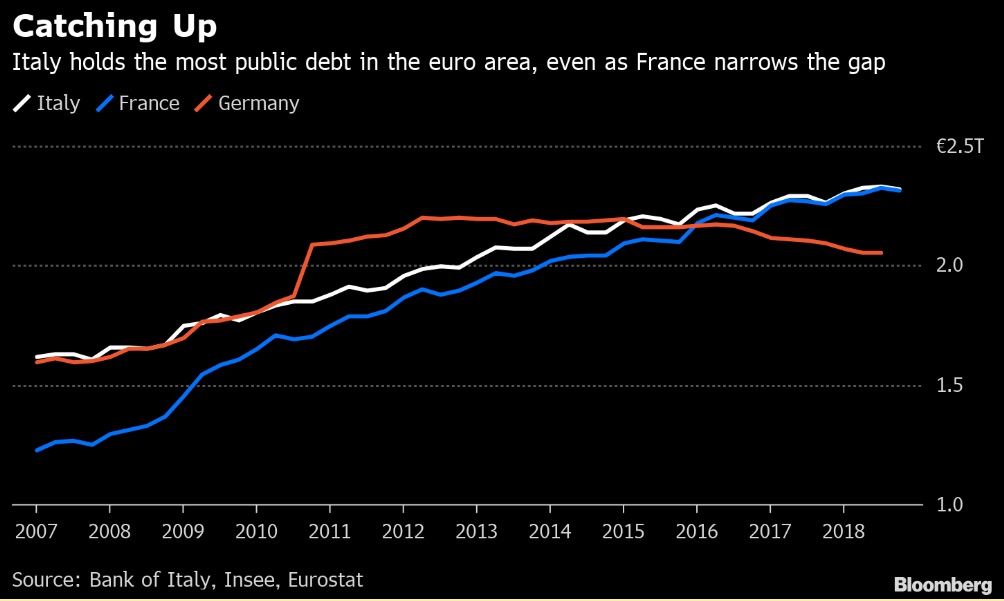 Italy’s debt is part of a bigger problem because others also are borrowing too much. By looking at the following 2018 graphic, you can decide where to worry. Please just focus on the size of the outline and its color. 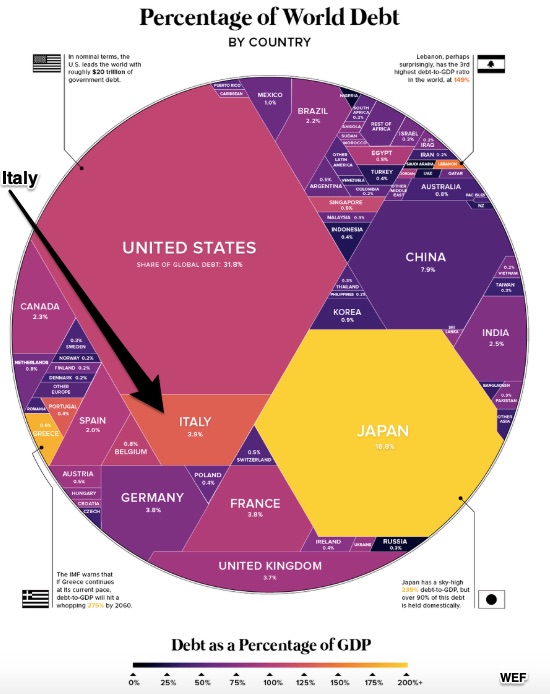 Do note that by debt, we are referring to all that a country has borrowed and not yet repaid. But how do countries borrow? They sell bonds to individuals (like you and me), institutions (like banks and pension funds), and countries who receive interest payments in return.

And sometimes, when borrowing becomes excessive, they even sell a palazzo.

My sources and more: Yesterday, this NY Times article reminded me it was time to take a new look at debt. With Italy as a springboard, world debt came next. For the Italian facts, there was some good contemporary analysis from Washington Post columnist Robert Samuelson and then a look back to 2011 from the Atlantic. But the most interesting article on Italy was about the properties being sold.

Our Weekly Economic News Roundup: From Fast & Furious to Netflix