Who Is Likely to Live Alone?

Sort of like bookends, we tend to live alone before we are 30 and after we reach 65. However, many of us are “unpartnered.” 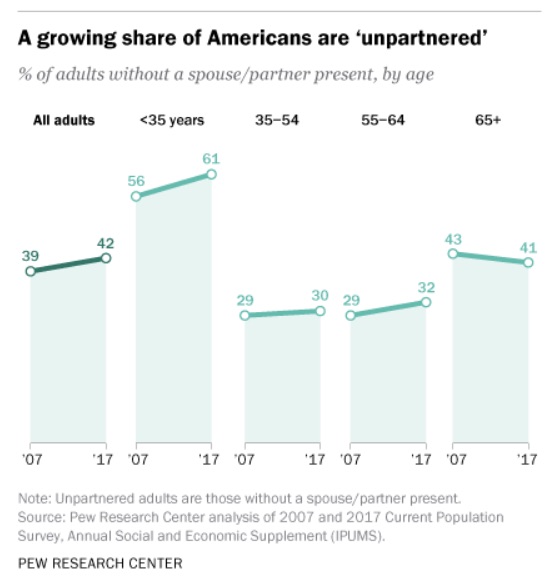 Among those of us who live alone, 58% have never been married, 21% are divorced, and 14% have been widowed. So yes, we are talking about a lot of people. One-tenth of all Americans and slightly more than one-quarter of all households are singles.

An NYU sociologist tells us that living alone is the logical result of four trends:

Marriage is one reason that the number of singles is up. In 2018, the average American woman married at 27.8 and her mate was 29.8. She is almost eight years older than her mother and grandmother when they married. Also, there are more people who never marry:

From here, education makes a difference. People with bachelor degrees tend to have partners more than those who do not: 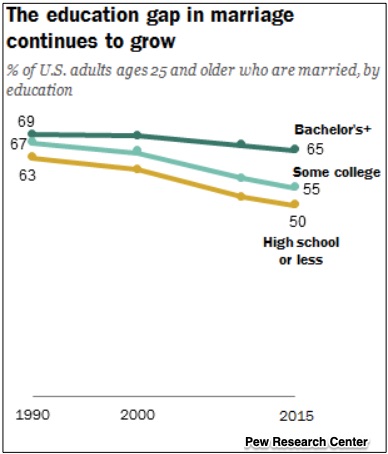 Where Do We Live Alone?

According to the U.S. Census Bureau, singles are concentrated in 21 urban areas where more than 1/3 of every household is occupied by one person. One reason could be that all but one have a lower cost of living. Another relates to the widowed population:

Living alone shifts how we spend our money. It changes the consumption components of the GDP.

A BLS study from 2011 concluded that except for healthcare, singles in their 20s (especially late 20s) spend “considerably” more per capita on food and clothing, housing, and education than comparably aged married couples .

A more recent but less academic report looked at the bigger picture. It told us  that single people take more vacations, are a “gold mine” for home entertainment equipment, going to the cinema, and dining out. And we should note that in China, Single’s Day has become a massive event.

Where are we? Affecting where we live, what we buy, and how we spend our time, the singles trend is a major economic phenomenon.

My sources and more: The Hill was a good starting point for the big picture on singles. From there, it made sense to find more on how singles spend and where the unpartnered live. Then, for further insight and detail, I suggest this New Yorker article, Pew, here and here, and this BLS study.

A Dilemma: How Much to Pay for Our Privacy Protection