Where It Costs the Most and Least to Live

If you want to visit an expensive city, Western Europe is your destination. Paris, Zurich, and Geneva were in the world’s top five: 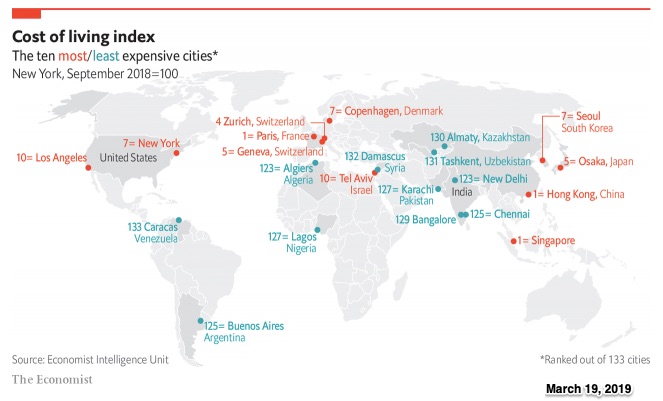 The World’s Most Expensive Cities

According to this year’s report from the EIU (The Economist Intelligence Unit), the world’s most expensive cities displayed converging costs. Reflecting globalization, people’s shopping patterns and tastes were similar.

Paris, Singapore, and Hong Kong were the three cities tied for the top spot. Then, Osaka and Seoul were the other two in the top ten from Asia while Tel Aviv was the only Middle Eastern city. The index uses New York as its base:

While spending in the most expensive cities was somewhat similar, there were differences. An appreciating dollar was one reason that Los Angeles and NYC climbed up the ranks as were expensive domestic help and utilities. In Tel Aviv, the high cost of purchasing, insuring, and maintaining a car nudged its rank upward and in Asian cities, groceries were particularly pricey. For Europe the report cited high household, personal care, and recreational expenses. But in Paris, they said you could save money on transport, alcohol, and tobacco.

Meanwhile, at the bottom of the list, we have cities experiencing economic and political turmoil. The result? Their cost of living is relatively low. However, they also ranked toward the bottom in the EIU’s Global Liveability survey.

Looking back ten years, the global trend is downward. For most Latin American cities, the dot (now) is to the left of a line showing where the cost of living was a decade ago: 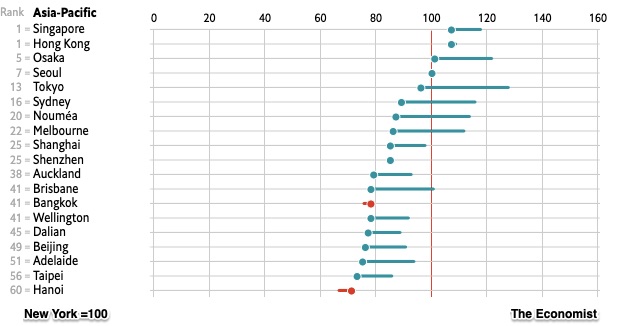 Our Bottom Line: Cost of Living

For their report, EIU researchers looked at 50,000 prices for 160 items in 133 cities. They included domestic help, utilities (electricity, gas, water, heating), transport, food, and clothing. They gathered the prices that people paid rather than suggested retail.

Let’s conclude though with the bigger picture. You can see that most food prices have trended downward during the past 165 years. 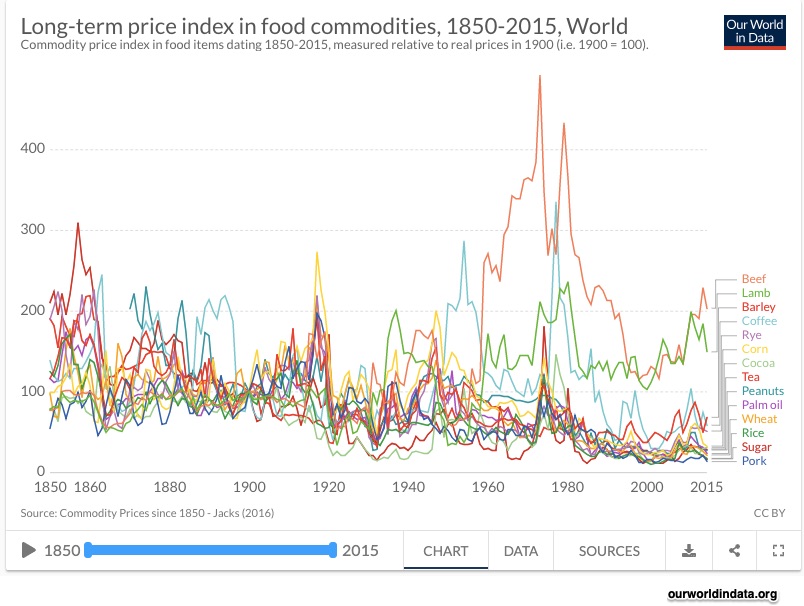 My sources and more: The original report on expensive cities came from The Economist Intelligence Unit. I gathered my facts from the un-gated (and free) summary but found extra detail at Yahoo Finance and The Economist. Then, our world in data was the ideal complement.

Will We Really Pay More to be Green?