During the 1920s, many U.S. farmers were having a tough time because of low prices and high debt. Although a tariff was not the answer to their problems, the Congress said it would only be fair if agriculture had the same protection as industry. Like today, the result was landmark protectionist legislation that covered farm and factory.

So, for Throwback Thursday, let’s take a look at the unexpected impact of a 1930s tariff on us.

Even before the Great Depression began, in 1928, the Congress began to debate tariff legislation. Two years later, President Herbert Hoover signed the Smoot-Hawley Act. Affecting hundreds of categories and thousands of items, the bill elevated average tariffs from 38% to 45%. But a unit tax magnified its impact. With a unit tax, a ton of steel could have a $100 tariff. However, once deflation struck during the 1930s, that $100 was worth much more.

Still though, most economists believe that Smoot-Hawley was not a major cause of the Great Depression. Instead, they say it was a signal that had a calamitous impact on world trade. Generating a cycle of reciprocal tariffs, the act also isolated the U.S. when it stimulated closer trading relationships among other nations.

For example, the Canadian government responded by reducing tariffs on 270 goods that it imported from the British Empire. At the same time, it raised them on U.S. exports that included potatoes, soup, livestock, butter, and wheat.

These were the numbers:

As you might expect, economists protested. On the front page of the NY Times, a statement opposing Smoot-Hawley ( also called Hawley-Smoot) was signed by 1028 economists. Echoing today, they predicted it would raise the cost of living and “injure the ‘majority of our citizens.'”

This is the beginning of the front page article: 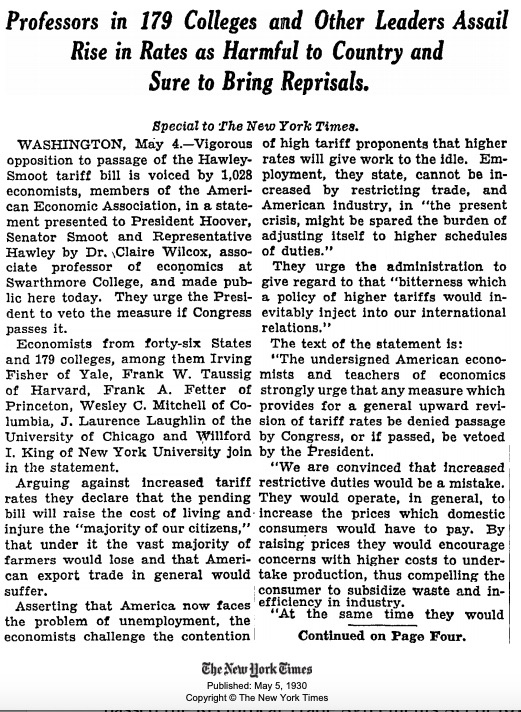 Having defeated Herbert Hoover in 1932, most Democrats wanted lower tariffs. The result was legislation in 1934 that spilled over into 2017. The new act–the Reciprocal Trade Agreements Act of 1934–gave the President the power to enter into trade agreements and raise or lower import duties. Extended in 1962 under President John Kennedy, the Act gave President Trump the power to implement his tariff policy.

So, on this Throwback Thursday we can say that problems with tariffs during the Great Depression added to a President’s power almost 90 years later.

But let’s end this #TBT with Ferris Bueller’s look at Smoot-Hawley:

My sources and more: I recommend subscribing to the NBER Digest. Their email alerted me to the paper on the political and economic impact of the recent tariffs. It also took me to a Peterson Institute report. and to a Washington Post summary of Smoot Hawley. But, if want to read a classic on trade (as did I) do go to Douglas Irwin’s Clashing Over Commerce. The source of most of my facts, it was excellent,

Where It Costs the Most and Least to Live

A Single-Payer Primer From the CBO