How Venezuela Caught an Incurable Case of Dutch Disease

Last week Venezuela went dark. No power, no internet. Public transportation was hit as were hospitals, food stores, communication. Upscale hotels with generators became a sanctuary for those who could afford a room. But even there, the power lasted only until the fuel ran out.

Where are we going? Yesterday we saw how Norway avoided Dutch disease after a massive oil discovery. Today, we will look at why Venezuela got very sick.

The Onset of Dutch Disease

Our story starts in 1922 when oil was discovered in Venezuela. Seven years later, their production was second only to the U.S. But unable to manage it alone, Venezuela depended on Standard Oil, Gulf, and Royal Dutch.

By the 1930s, an economic doctor would diagnose some Dutch disease. Oil had quickly climbed to 90% of Venezuela’s exports and taken the value of the bolivar up with it. As a result, exports became more expensive while imports were cheaper.

Venezuela’s next step (as you would expect) was taking more profits, more ownership, and higher taxes from the foreign oil companies. But the big turning point was nationalization when, in 1976, Venezuela created PDVSA Petróleos de Venezuela.S.A. After that the pattern repeats itself with foreign oil companies coming in, investing, spurring production, and then being pushed out. 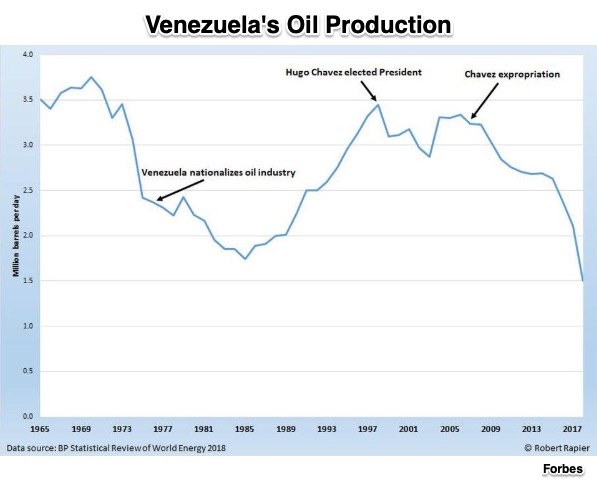 The Disease Gets Worse

Meanwhile, all was not well with the economy. Making a long story very short, we will skip a 1970s boom, a 1980s glut, and an IMF bailout, and fast forward to 1998 when Hugo Chavez brings his version of socialism to Venezuela. He reduces poverty, perhaps by 20%, and subsidizes necessities.

But it all depends on the price of oil:

When the price of oil went down, the Venezuelan economy had no shock absorbers because Chavez had distorted all market activity through price controls and expropriation. He took over land and businesses and attacked entrepreneurs. Yes, those with less got more. But also, lines outside supermarkets got longer as shortages multiplied. By 2007 price and capital controls had begun to create economic havoc. Standing in line for hours, people hoped to get some cheap cooking oil, milk, bread, and pork before they ran out.

After Hugo Chavez dies from cancer in 2013, Nicolas Maduro continues his policies and Dutch disease intensifies. Jumping to today, we see Venezuelan hyperinflation, a plunging GDP, soaring debt, and a severely distressed economy. The average person in Venezuela lost 24 pounds in 2017.

Venezuela’s political leaders diminished the power of the market through price ceilings. Those price ceilings were but one of the many symptoms (of a broad definition) of Dutch disease because oil empowered their creation.

Classic economics, the price ceiling tradeoff is between price and quantity. By keeping price low, we create a shortage. When you remove the ceiling, price moves up to the equilibrium point that the market determined:

In Venezuela, when the ceiling moved down below equilibrium, the result was life threatening food and medicine shortages and the 2019 blackout.

My sources and more: WSJ columnist Mary O’Grady, here and here has had lots to say about Venezuela. The perfect complement, the Council on Foreign Relations here, here, and here (a handy timeline) had the history while Forbes told us a bit more.

Parts of Our Bottom Line were in a past econlife post. Our featured image is from Pixabay.

When Ketchup and Parking Are Similar