It can be tough to violate a gender stereotype.

Do take a look at Ben Stiller’s plight in Meet the Parents:

The Upside and Downside of a Gender Stereotype

In 2004, at the World Series of Poker, a woman and a man remained in the last round. Although Annie Duke had been playing in top poker tournaments for a decade, she believed ESPN invited her to the World Series as a token. They needed a female at the table.

When a woman competes against men in poker, gender can shape strategy. You might have a stereotype tax where the stereotype helps the woman. She can use what the men expect such as “playing like a woman” to her advantage. A man for example might expect her not to bluff when she is quite good at it.

As Annie Duke explained, she can strategically take advantage of three kinds of opponents:

However. that very same stereotype can play mind games with a woman. She can be afraid of displaying stereotypical behavior, even when a move demands it. In poker, she might not fold when she should.

Annie Duke won $2 million at the 2004 World Series of Poker. Yes, her victory was about her skill. But also it relates to the stereotype tax.

Our Bottom Line: The Stereotype Tax

Unknowingly, many men pay a stereotype tax. USF Professor Jennifer Bosson explained why through her research on “precarious manhood.”

In one experiment, Bosson asked some men to  braid a female mannequin’s blond hair while others braided rope. Next, they chose between punching a bag or doing puzzles. The mannequin group tended toward punching,

The reason? Because the mannequin group had violated a gender role, Bosson theorized that some of them needed to follow it with aggressive behavior.

Similarly, certain professions have a gender connection. Think kindergarten teacher and a woman comes to mind. Carpenter? A man. The problem for men though is that many of today’s fastest growing occupations relate to women: 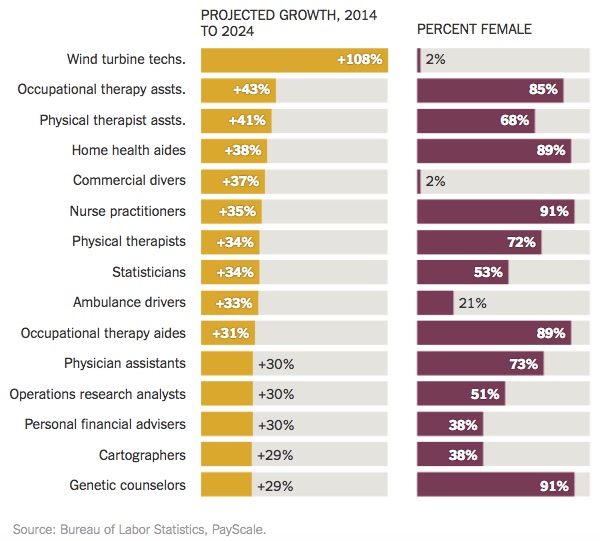 The men that avoid an occupation associated with women are paying the stereotype tax. Deciding not to become a nurse practitioner or a human resource manager can be costly.

It returns us to Robert de Niro’s expression when his son-in-law, Ben Stiller says he is a nurse.

My sources and more: Always interesting, the Hidden Brain podcast was where I started. While the podcast touched a slew of issues, I followed  Jennifer Bosson’s research on male fragility. It formed the perfect link to the occupations men tend to avoid.

Why a Higher Minimum Wage is like a Google Map