During a venture capital pitch, an entrepreneur was told,  “I can’t fund you because you’re pregnant.”

Woman have said they have to hide that telltale pregnancy bump when looking for venture capital. No, there aren’t any statistics that say pregnant entrepreneurs don’t get money. They don’t exist but the stories do.

Whether starting a business, driving a delivery truck, or working in a warehouse, pregnant women cope with discrimination.

The PDA had been passed in 1978 because of a Supreme Court decision in which the Court said that pregnant women were not covered by the Title VII (prohibiting sex discrimination) Amendment to the 1964 Civil Rights Act. Explained in Slate, “The PDA requires that employers treat ‘women affected by pregnancy’ the same as ‘other persons not so affected but similar in their ability or inability to work.’”

When part time UPS driver Peggy Young became pregnant in 2006, following medical instructions, she told her employer she could no longer lift the 70 pound packages that were sometimes a part of her job. During the first half of her pregnancy, her maximum would be 20 pounds and then 10 pounders at the end. When UPS refused to comply and she left, UPS responded with unpaid leave, no healthcare benefits, a lost pension. In 2008, she returned to work and sued UPS. The courts had to decide if the Pregnancy Discrimination Act (PDA) had been violated.

Making a long story very short, we can just conclude that the issues are not entirely settled. After the lower courts essentially supported UPS by not letting the case go to trial, the Supreme Court disagreed. Affirming the PDA, they said Ms. Young deserved her day in court and sent the case back to the lower courts. (The case wound up settling out of court.)

During September, 2018, the EEOC (U.S. Equal Employment Opportunity Commission) filed suit against Walmart for pregnancy discrimination. They say that Walmart violated federal law when it observed the medical restrictions requested by non-pregnant employees but not what pregnant workers required. Walmart had a light duty alternative that was not available to pregnant workers. The EEOC is seeking back pay, punitive damages, and future accommodations. On January 29, a judge rejected Walmart’s request to dismiss the case.

A higher proportion of the female population is participating in the labor force: 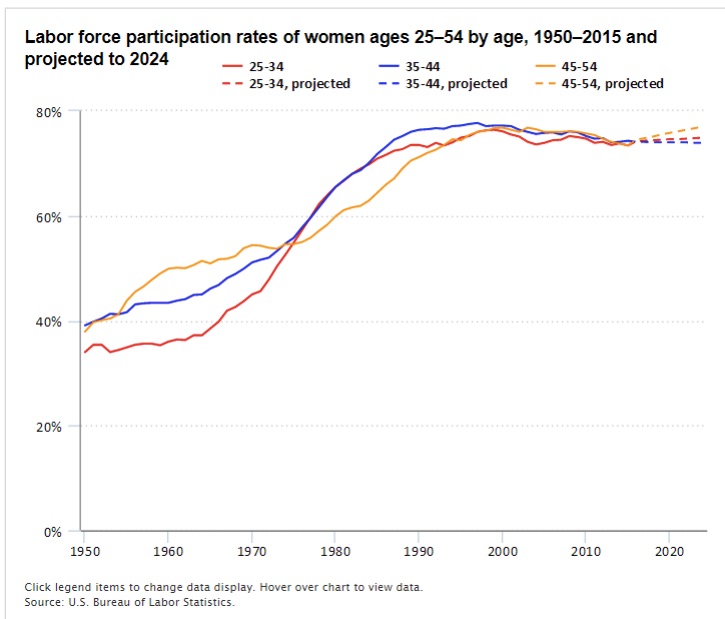 And many of those women are mothers. For mothers who do and do not have a spouse present, the participation rate–the proportion of that population, 16 and older, that is in the labor force– is approximately between 60% and 80%: 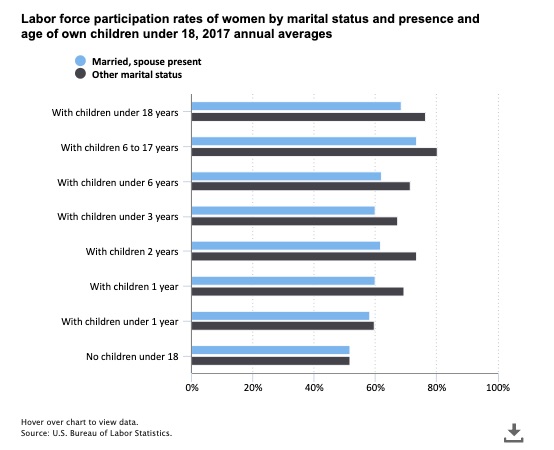 So yes, whether a women is looking for VC money or driving a truck, she cares about pregnancy discrimination.

My sources and more: Thanks to Marketplace for reminding me it was time to return to the human capital problem of pregnancy discrimination. Their podcast led me to this Guardian article and to the 2015 Supreme Court decision. We also should keep an eye on how the Walmart case will progress.

Please note that parts of today’s post were published in a past econlife.

Our Weekly Economic News Roundup: From a Coupon to a Resource Curse

How to Deal With (Airplane Seat) Recline Rage