Why Pregnancy is a Labor Force Issue

Hired in 1999 to deliver light packages and occasionally something heavier, UPS driver Peggy Young became pregnant seven years later. Following her doctor’s instructions, she told her employer she could not lift packages that weighed more than 20 pounds during the first half of her pregnancy and then 10 pounders at the end. UPS responded with unpaid leave, no healthcare benefits, a lost pension. After returning to work in 2008, she sued saying the Pregnancy Discrimination Act (PDA) had been violated. In Young v. United Parcel Service, the Supreme Court heard the arguments on December 3, 2014.

Where are we going? To the economic significance of pregnancy.

The PDA had been passed in 1978 because of a Supreme Court decision in which the Court said that pregnant women were not covered by the Title VII (prohibiting sex discrimination) Amendment to the 1964 Civil Rights Act. Explained in Slate, “The PDA requires that employers treat ‘women affected by pregnancy’ the same as ‘other persons not so affected but similar in their ability or inability to work.’”

UPS says they were “pregnancy blind” when they judged the Young request for modified responsibilities. Their policy (which they have subsequently modified for pregnancies) required the disability to have occurred on the job, have been covered by the disabilities legislation or involved losing a federal driver’s certificate.   Peggy Young’s attorneys say she was the victim of job discrimination under the PDA. Meanwhile, on the regulatory front, President Obama says regulatory agencies are working on additional guidance.

Comparing this “Population and the Labor Force” pyramid for 1950 and the next one for 2000, the change in women’s labor force participation is striking. 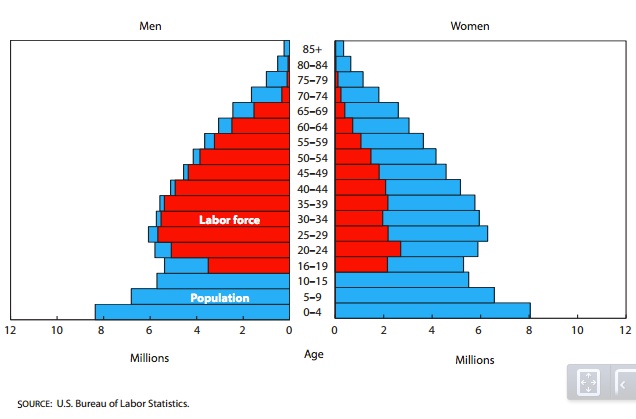 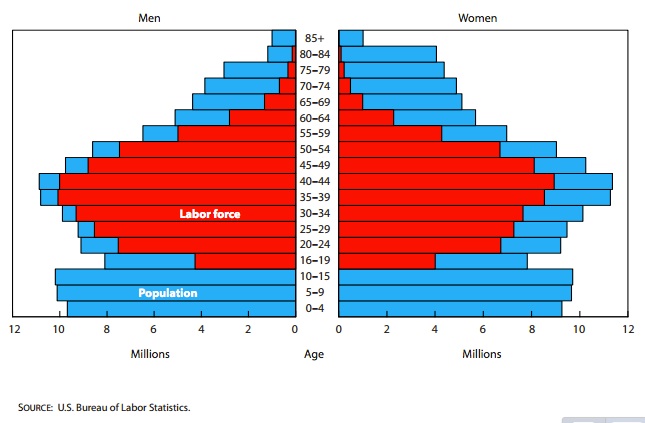 And, many of these women are moms:

You can see why pregnancy has become an issue.

The shifting composition of the labor force has made pregnancy an issue that relates to optimizing human capital. From here though, thinking of large and small businesses, single and married moms, high and low earners, it gets much more complicated.

Expanding How We Measure Inflation