When we last looked, the evidence indicated the Philadelphia sugary drink tax had problems. Now a new paper finds even more was wrong.

Targeting a vast array of sugar sweetened and artificially sweetened drinks,  the Philadelphia sugary drink tax affected most of the beverage aisle. The price of a 2-liter bottle of Coke, for example, went up a whopping two-thirds–from approximately $1.56 to $2.57.

These are some of the brands that were hit:

The Philadelphia tax kicked in on January 1, 2017. According to the mayor’s office, its main goal was revenue. However, as a 1.5 cents an ounce tax on distributors, consumers felt the bite when it passed through. 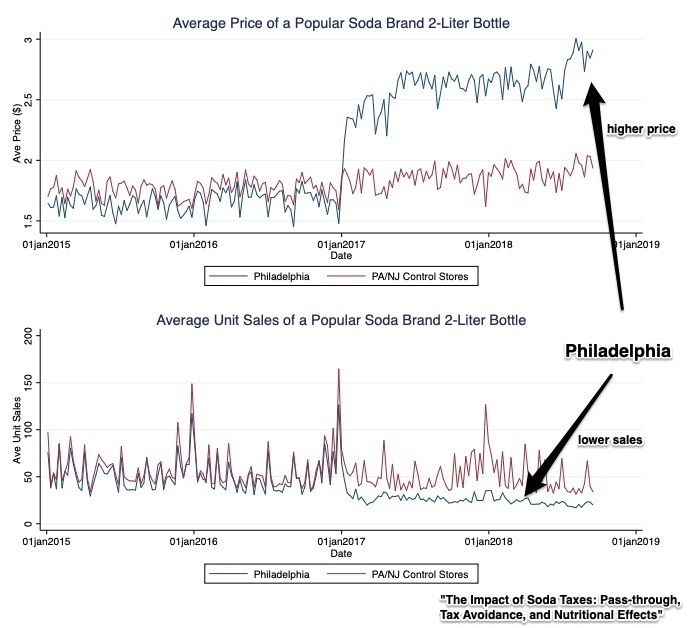 You can see how elasticity and a sugary drink tax relate. If our demand is elastic, our purchases will plunge because of a tax. With the Philadelphia soda tax, people’s ability to cross shop and their preferences for sugary drinks appears to have all of the characteristics of inelastic demand.

My sources and more: Presenting the perfect summary, WSJ led me to the new paper on the Philadelphia soda tax. And, this was the earlier 2018 study that cited some problems.

What the IRS Says About Panera's Pay What You Want

March 2019 Friday's e-links: From "To Kill a Mockingbird" to the History of Sports Bras and the Economics of Inclusive Prosperity