It is likely that Europeans will be selecting perpetual summer or winter time. Since 84% of the 4.6 million respondents to an EU “public consultation” said they no longer want a twice yearly time change, the policy could end.

This is the current time zone situation: 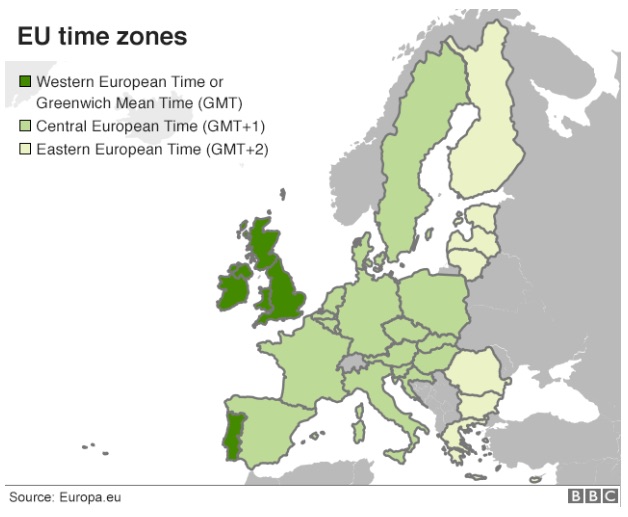 Our story starts in 1996 when the EU mandated the twice yearly time changes–to fall back and spring forward. Their reason was energy savings (that are questionable). Now though they are reconsidering.

We could say that the debate is about geography. In the South, the day is five hours longer in June than December. For those farthest north, the swing could be as much as 20 hours.

You can see below that Finland especially dislikes the time changes. If they keep wintertime all year round, then they get extra morning light that they appreciate during the coldest months. And they won’t have the hassle of switching: 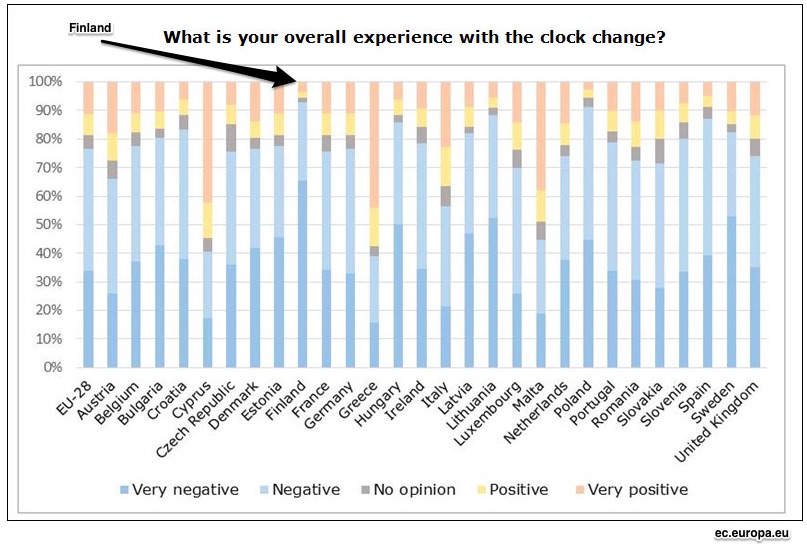 So, the EU has proposed that each country can make its own decision. It can decide whether to keep summer time (which happens in March when they spring forward) or winter time (when they fall back on the last Sunday in October). Portugal and Greece though have said they want to maintain the twice yearly changes.

One chronobiologist said that Europeans could become “fatter, grumpier, and dumber” if they select perpetual summertime. Darker mornings that could lead to depression are the reason.

Transaction costs are about more than money. They involve the time, the forms, the lines, and all that slow a task.  When the United States switched to four time zones, the railroads were the main reason. With clearly defined time zones, towns no longer could decide what time it was. For the railroads and all others, those four zones made coordinating activities much easier. They diminished transaction costs.

If the EU no longer dictates the time, they could be moving from the nuisance of spring forward and fall back to the chaos of neighboring countries with different times. Surely then transaction costs would multiply.

My sources and more: Together, WSJ and the BBC told the whole time change story. Then Reuters had an update and the EU published the original report.

Six Facts: What We Don't Know About Tipping