Why Driving is Safer in Sweden

An economist might say that the optimal number of traffic fatalities depends on the cost of preventing them. Sweden disagrees.

Compared to most other countries, Sweden’s road safety is tops: 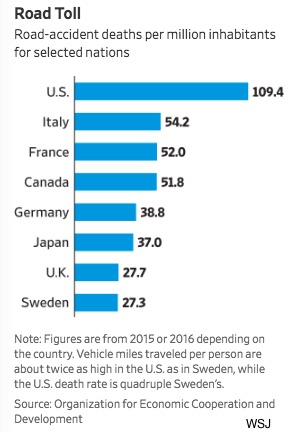 In the European Union, Sweden and Norway have the low numbers while Bulgaria and Romania (dark blue) have the most road deaths per million: 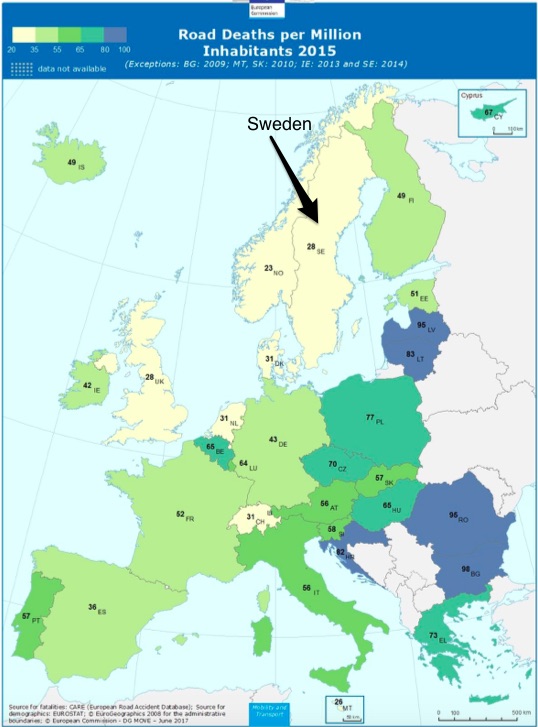 Through a “Vision Zero” strategy, Sweden is aiming for no traffic fatalities. So far, they’ve been able to almost halve the number of road-related deaths from 541 to 270 between 1996 and 2017. Why? Because Swedish traffic authorities focused on traffic laws and infrastructure instead of the drivers, walkers, and bikers.

Many of Sweden’s roads have new safety features. The wider arteries that installed guard rails between oncoming traffic diminished deaths by 80%. Their use of the 2+1 road boosted safety by having one direction-switching lane that permits passing. In addition, Sweden built more roundabouts and rotaries because they reduce how fast people drive and eliminate the hazard of left turn accidents.

But it’s about more than the flow of traffic. In places with bikers and other unprotected road users, top speed limits are 30 kilometers an hour (18.6 mph). At so low a speed, people struck by vehicles have less than a 10% chance of dying. In 50 kilometer zones, the percent rises to more than 80. On long stretches of country roads safety cameras are supposed to “nudge” people to drive more slowly rather than nab speeders.

Smiling, I can say this is what Sweden’s traffic planners avoid:

Our Bottom Line: The Cost of Road Safety 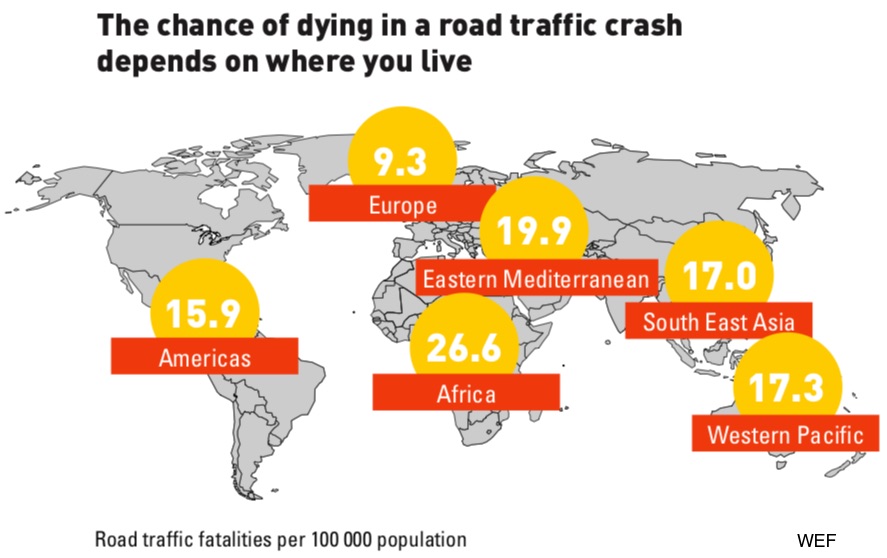 As economists we have a mindset that asks the cost of eliminating those deaths. Thinking at the margin (as we might also for diminishing air pollution), we can compare two numbers. We can ask the extra cost and the extra benefit for every life saved. And, when cost exceeds benefit, our life-saving initiative stops.

My sources and more: In WSJ, in Quartz, and at City Lab,  Sweden was the perfect traffic safety starting point. A much more recent WEF discussion confirms what those 2014 articles say.

Our featured image is a roundabout visualization of a Texas I-35 improvement plan.

Why Urban Farmers Plant Their Crops in Garages