All relate to overusing resources that are not privately owned.

Beach-hoggers arrive early. In a prime place near the water, they spread out a blanket, stick an umbrella in the sand, and open a beach chair. Planning to return in several hours, they leave.

In parts of Italy and Spain, an unoccupied “reserved” beach space is illegal. During morning raids the police seize the items on it and fine the perpetrators.

With general admission seating, some Phish fans arrive early to get a choice location. They might just dash for the first row and spread a tarp across multiple first row seats. In the same way, fans were seen blocking off many seats–60 in one WSJ article–with T-shirts on chairs for friends who had not yet arrived (and might have been partying in the parking lot).

Like beach-hogging, Phish-tarping (or tarping at any concert) can be questionable. Some tarpers say their diligence and early arrival earns them the space. Others disagree. In a guide to a three-day festival at Watkins Glen, N.Y., tarps were prohibited on the concert field.

I had thought that whenever anyone occupies more than one seat, that person is seat-hogging. However, at SeatHogs.com, they suggest that seat-hogging kicks in when you are actually stopping someone from using the extra area you occupy. Their list of seat-hogging tactics include:

Consequently, the experts at SeatHogs.com say that Tom Hanks is NOT seat-hogging because other seats are obviously available: 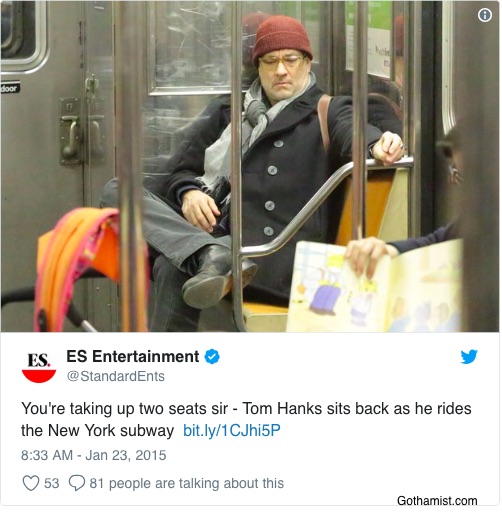 Because a beach, a general admissions concert, and a subway car are shared resources, some of us mistreat them. Called the tragedy of the commons, cows are allowed to overgraze a shared meadow, we overfish the ocean, and factory owners pollute the air. The reason is the “commons.” When no one owns a resource, there is less incentive to care for it.

Similarly, by saving space that others could use, hoggers and tarpers are creating the negative externalities that harm third parties. They too are contributing to a tragedy of the commons.

So, when you ponder the cause and effect of overfishing, do also think about beach-hogging, Phish-tarping and seat-hogging.

My sources and more: Thanks to WSJ for yesterday’s Phish-tarping story. It was the perfect reminder that took me back to beach-hogging and ahead to seat-hogging. Then, if you still want to read onward and are not uncomfortable with occasional off-color language and some inaccurate spelling and grammar, do go to SeatHogs.com for all you could possible want to know about seat-hogging.

Please note that one sentence in Our Bottom Line was in a previous econlife post. Also, our Phish featured image is from Wikipedia.

Why It's Tough to Catch Venezuela's Runaway Hyperinflation

Why It's Not Easy to Design a New Animals Crackers Box