Six Facts We Need To Know About Medicare

Every year, Medicare’s Board of Trustees reports to the Congress. Since its 53rd report came out yesterday, I thought we better take a look.

During 1965, President Lyndon Johnson called Wilbur Mills, chairman of the House Ways and Means Committee, and said, “Wilbur, I’ve just been looking through the polls here, and I’ve only got a few weaknesses, and the worst of them is that I’m not doing anything for the old folks. I need some help from you.”

The result? Congress passes Medicare Parts A and B and since then we’ve gotten Parts C and D. Oversimplifying pages of detail, let’s say for now that Medicare funds hospital and home healthcare primarily for the aged who receive Social Security and also for the disabled. Part A covers everyone’s hospital related care while you have to pay a premium if you want the doctor visits and prescription support in Parts B and D. (Part C involves private health plans.)

Finally, we should add that Medicare has two funds that the Trustees oversee. One fund is for Part A and the other for Parts B and D. The trust funds grow whenever revenue from payroll taxes, premiums and interest exceed spending while money is withdrawn if revenue is inadequate. The extra money? It is invested in U.S. government securities that pay interest.

The first baby boomers turned 65. Their numbers will swamp the system and bring it down from 3.1 workers to 2.4 in 2030. The ratio matters because the workers pay the Medicare tax.

You can see how the ratio dips: 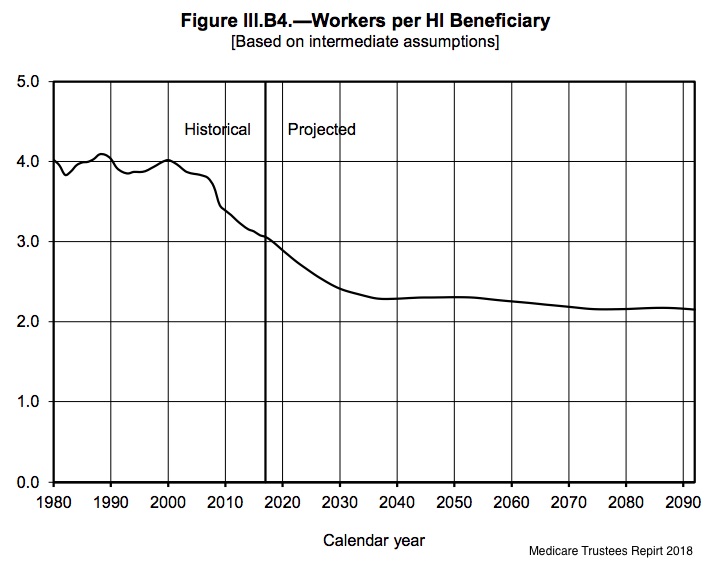 Medicare operated with a deficit. The program’s expenditures ($710.2 billion) exceeded its income ($701.5 billion). During 2017 Medicare covered 49.5 million who were 65 and older and 8.9 million disabled individuals. Except for 2020, deficits are projected throughout Medicare’s future.

When the President submits his 2020 budget to the Congress in 2019, he will have to include a plan to solve Medicare’s financial difficulties. In their 2018 Report, the Trustees declared a Medicare funding warning. Mandated by law, the warning is triggered by inadequate financing. That warning requires a plan from the President.

Starting in 2025 physicians will be paid less. At that time, payments of $500 million a year for one group of physicians and a 5% annual bonus for another group will expire. With less compensation, physicians could flee the program.

In 2026 one of Medicare’s two trust funds will be depleted. Since the fund will no longer be there to cover shortfalls, revenue will cover 91% of the program’s estimated expenditures. In last year’s report they thought the depletion date would be 2029. Now, the outlook is worse.

Below, HI refers to the trust fund for Part A spending: 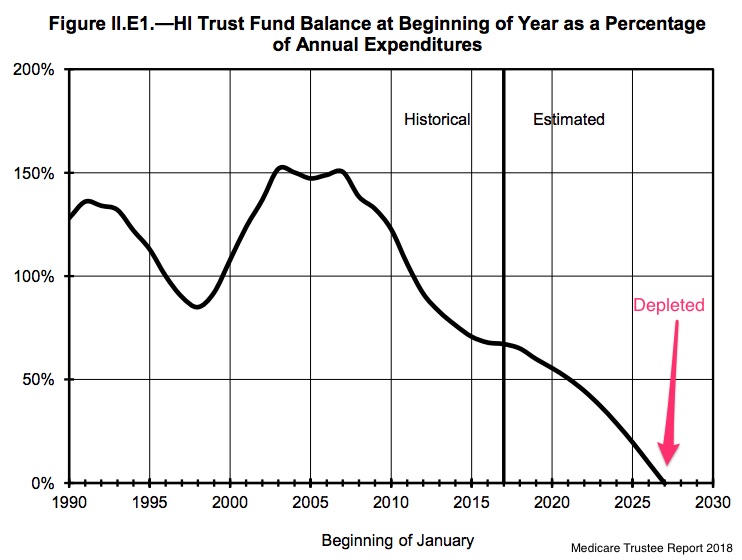 We should note that Medicare’s second trust fund is expected to be okay for the next decade because the premiums people pay and the general revenue it receives increase with expenses.

During 2032 and thereafter, Medicare will require 49% of its funds from the federal budget.

While the Medicare trustees project deficits that will put more pressure on the federal budget, the Congress has not focused on them. Though dated, this survey from Pew tells us why: 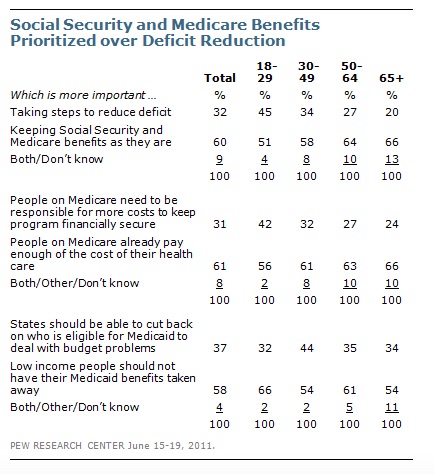 As economists, opportunity cost always provides some handy insight. Defined as the next best alternative, the opportunity cost of solving the Medicare problem is too high. Politically unpopular, it would involve raising taxes or lowering benefits.

My sources and more: Dry and long, the Trustees 2018 Report is chock full of facts. However,  Kaiser has all the details that we skipped and the Congressional Research Service had a Medicare primer. Then, as the last piece of the Medicare puzzle,  Pew’s survey was ideal.

Please note that several sentences in this post were in a previous econlife.

Why We Should Apologize to the IRS