Why We Need Holey Cow and Other Cheesy Names

More than 30 years ago, an Italian family and two master cheesemakers moved to the United States. Preserving their great grandfather’s legacy in Wisconsin, the family produced traditional Italian cheeses like Parmesan.

The brand was BelGioioso: 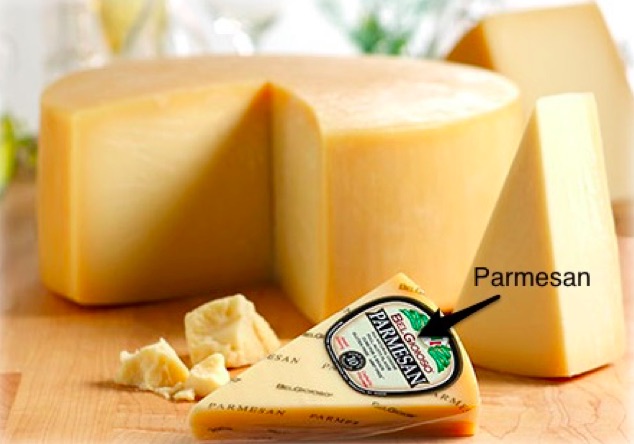 But now, they might have to stop calling it Parmesan.

Our story starts in an EU (European Union) book of regulations. Including Parma ham, Dutch Gouda and Champagne, each product in a 1000+ list has the exclusive right to its name. The privileges are called PDO (Protected Designation of Origin), PGI (Protected Geographical Indication), and TSG (Traditional Specialties Guaranteed). But let’s just call it GIs (Geographical Indications).

The battle over GIs has been raging for decades. In 2005, a fight about feta ended with Greek cheesemakers winning. From then onward, in the EU, no one could place the feta label on an identical cheese that wasn’t Greek. Instead, a Danish dairy cooperative resorted to calling its feta “salad cheese” or “white cheese.”

Of course, a Wisconsin cheesemaker can call its cheese Parmesan in the U.S.

The problem starts when they want to sell it elsewhere. Ranging from Mexico to Japan and South Korea, a host of nations are signing free trade agreements with the EU that exclude the U.S. Because many of those agreements extend the reach of GI restrictions to each signatory, our cheesemakers suffer. A U.S. producer saw sales plunge when he had to call his Asiago cheese, “Sartiago.”

Others though have been a bit more creative. A California cheesemaker called its Emmenthaler-like cheese Holey Cow:

Looking through an economic lens, we can see the benefit of the GI designation. From monopolistic competition among many small producers, the EU trademark protection moves the product to the right along a competitive market structure continuum.

And, like the monopoly that it is nearing, the firm with name protection has more price making power:

My sources and more: This WSJ article and Modern Farmer reminded me that it was time for an update on cheese names. Meanwhile, the feta story came from Reuters and I learned about BelGioioso from their website. However, if you just visit one mouthwatering link, do go to Cowgirl Creamery for great cheese names and taste. I recommend Mt. Tam and reading the Cowgirl story.