On Interstate 405, near Seattle, drivers can avoid traffic congestion by paying for the right to drive in the fast lane. They can also thank regulators for the $10 congestion pricing cap. Yes?

Also known as the fast lane, the typical High Occupancy Toll (HOT) lane targets drivers with a passenger and those driving alone who are willing to pay a toll. The catch is that the price goes up when congestion increases. On most roads the price increase is limited. Elsewhere it rises as high as it needs to go to diminish traffic.

During rush hour on Washington’s I-405, the pricing cap kicks in 15% of the time. If there were no cap, the price would continue rising until traffic moved at approximately 45 mph. With the $10 ceiling though, traffic remains slow, and people who pay get no benefit.

You can see that we have a dilemma.

The law of demand says that a higher price decreases the amount people purchase. So yes, a higher price in the fast lane will diminish its use. However, the price might have to rise precipitously to really achieve its goal. For a Virginia HOT lane that meant $44. It also meant that they had a political problem when that fast lane was called the “Lexus Lane.”

This was one person’s response to the $44 HOT lane price: 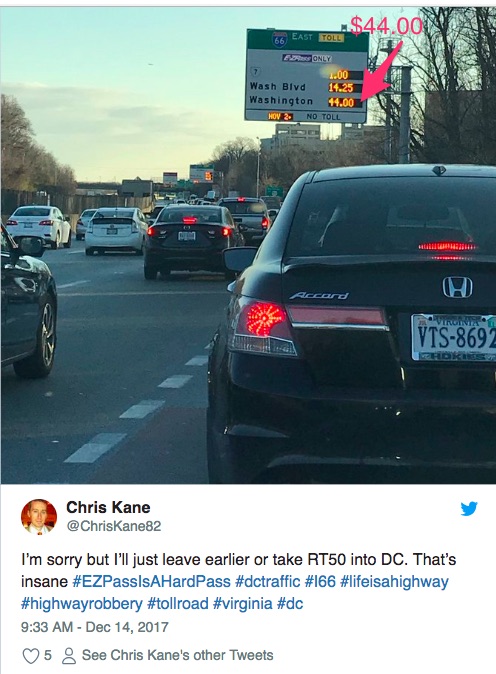 Our Bottom Line: Equality or Efficiency?

The HOT dilemma reminds me of Arthur Okun’s Equality and Efficiency.

As Okun explained, always, we’ve experienced a tension between our democratic and economic incentives. With our roads, our democratic heritage dictates equal access for everyone, everywhere, no matter what the expense. However, the market side of the equation takes us to efficiencies that optimize road use for some of us.

The side we select returns us to the tradeoffs we are willing and able to make. Individually, we are deciding between time and money. But as a society, the HOT lane price cap debate reflects the choice between equality and efficiency.

My sources and more: WSJ alerted me to the caps tradeoff. But for the whole HOT story, The Washington Post has more detail as does this Crosscut blog.

Why We Need Holey Cow and Other Cheesy Names