Why HOT Lanes are a Hot Topic

In the high-occupancy toll lanes outside of Washington D.C., you could pay close to $4.00 a mile. Just for a 9-mile stretch along Interstate 66, the toll has totaled $40.00.

On December 5, 2017, commuters in the I-66 HOT lane outside of Washington, D.C. paid a Tuesday morning peak toll of $40.00. Republican Congressman Timothy Hugo said the tolls were so “unfair” that legislators were going to consider a cap.

HOT advocates say that the toll lane accelerates traffic in the express and local lanes and generates revenue. One example from VDOT (Virginia Department of Transportation) said average speed was up from 37 mph to 57 mph during the morning rush hour. Correspondingly, on another day, the express lanes were moving at a 57 mph pace–up from 37 mph last year. As for the revenue, The Baltimore Sun reports that a local HOT lane had collected $9 million during 2016.

Opponents though have data that shows the improvement can be short-lived. After a year, speeds crept closer to pre-HOT lane levels. Calling them Lexus Lanes, critics also cited the need to pivot toward equitable transportation. As for carpooling, they said HOT lanes were a source of pollution because of the SOV (single occupancy vehicle) incentive.

While HOT lanes differ, the following I-66 signs convey what they involve,

Typically, the HOT lane offers toll-free use to higher occupancy vehicles (sometimes 2 people but could be 3 or more). Only cars without passengers owe the toll. 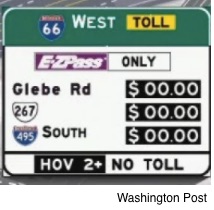 Based on demand, prices change. When there are more cars, SOVs pay more:

Called dynamic pricing, some airlines charge each of us a different fare based on why and when we travel. But how to find out? That’s where the weekend comes in handy. Travelers who stay over a Saturday night–vacationers– get the lower fares.

Similarly, some restaurants charge more for a Saturday night reservation and less for Tuesday. Zoos lower the price when it rains and sports events are sometimes cheaper when less popular teams play. Meanwhile, Amazon might change a price many times during one hour. And we all know about Uber’s price surges.

The key here is that consumers are paying different prices for the same good or service. The goal is to generate more revenue by separating those willing to pay more from others who will not. With HOT, in addition to the revenue, traffic congestion might be eased.

So yes, many economists would applaud. However, we have not decided if the concept is fair. But here too an economist would have an answer after looking at opportunity cost.

My sources and more: After Bloomberg radio briefly cited $34.50 tolls on December 4th, I researched their HOT lanes. Happily, I found a local news report, this discussion of a HOT lane, and analysis from The Baltimore Sun. Finally, to locate them, this report has a list (but no date).

Please note that a section of Our Bottom Line was published in a previous econlife post.