It appears that Elon Musk’s year-old Boring Company has tunnel vision. The firm has proposed a high-tech tunnel between NYC and Washington D.C. that got a verbal okay from the White House:

Where are we going? To new tunnels and the old Erie Canal.

Meanwhile Maryland gave Boring the go ahead for a 10.1 mile tunnel under a section of the Baltimore-Washington Parkway. Also, Chicago is considering Boring for a speedy connection between its downtown and O’Hare International airport. And, close to SpaceX (near Los Angeles), construction has begun on a 2-mile long underground tunnel that Musk hopes he can extend another 15 miles.

Below, Elon Musk described a bit of what he would fund, build and operate for Chicago: 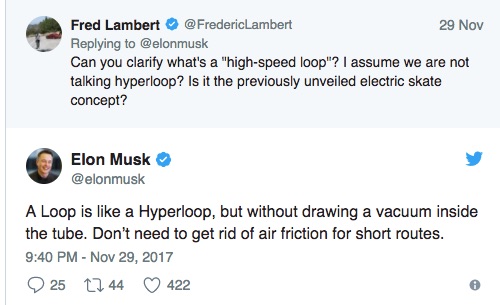 Musk’s current projects are not quite what he ultimately seems to have in mind. His LA project is drive on/drive off with cars and passengers carried along by an electric “skate” moving on magnetic rails. Ultimately though, the Musk vision is tubes in which capsules move as fast as 750 mph along a cushion of air.

I believe that this is the “skate” concept planned for the LA tunnel:

Here is a Hyperloop rendering:

People with tunnel knowhow wonder if any of this can work. After all, the 35-mile Gotthard Base Tunnel took 17 years and $7 billion to slice through the Swiss Alps. There also is London’s recently completed $19.4 billion, 26-mile underground rail connection to Heathrow. A 9-year project, it won’t be entirely operative until 2019.

But they thought the Erie Canal was impossible too.

His last name was Clinton, he wanted to be president, and he became known for “Clinton’s Folly.” This Clinton lost the presidency in 1812 (James Madison won), and later in his political career, as governor of New York, he wanted to dig a 363-mile canal. Because no canal in the nation was longer than 2 miles, people ridiculed the proposal.

DeWitt Clinton proved them all wrong. Between 1817 and 1825, using (what was then) revolutionary technology, the Erie Canal was dug. Its impact was immense. By connecting Albany to Buffalo, New York, the canal completed an all-water route between the port of New York and the Great Lakes, thereby permitting eastern manufacturers to trade with western suppliers of raw materials. Instead of traveling via slow and expensive overland routes, goods could move across the Erie Canal more cheaply and quickly.

Like DeWitt Clinton, Elon Musk says his Boring Company can inspire and enable our transportation infrastructure to take a leap forward.

Maybe Musk is on the right track.

My sources and more: Having discovered the Boring Company in Gizmodo, it was impossible to stop reading. From there, Quartz is perfect as a second stop and after that, the possibilities include Bloomberg, Mashable, Curbed. Then finally, I felt obligated to convey CNN‘s concerns.

Our Bottom Line includes an excerpt from the revised edition of The Foundation Econ 101 1/2 Part 2.

Why HOT Lanes are a Hot Topic