Think for a moment about the size of a nation’s labor force. In many ways, the bigger the better. More workers mean more people contributing to economic growth. It means a proportionally smaller non-labor force population depends on those workers.

So when relatively fewer people participate in the U.S. labor force–like 24 million prime age individuals–we should be concerned.

Who Doesn’t Participate in the Labor Force?

Researchers believe that opioid use is “intertwined” with being outside the labor force. Presenting considerable detail, economist Alan Krueger documents daily pain and painkiller use among almost half non-labor force prime age (ages 25-54) men.

Just a fast look at the map reveals the correlation. The darker green counties have the high opioid use and the declining labor force participation rate: 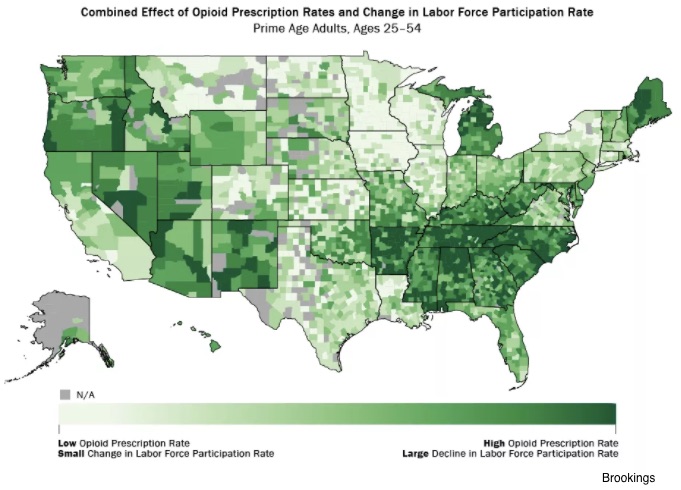 When economists try to diagnose the reasons for proportionally less labor force participation, their do spotlight prime age less-educated men. However, the largest group is composed of women with a high school education or less. And then, they also focus on the older end of the population and the youngest who might be students.

More simply though, let’s just look at the facts through a gender and age lens. You can see below the male and female numbers for three key age groups: 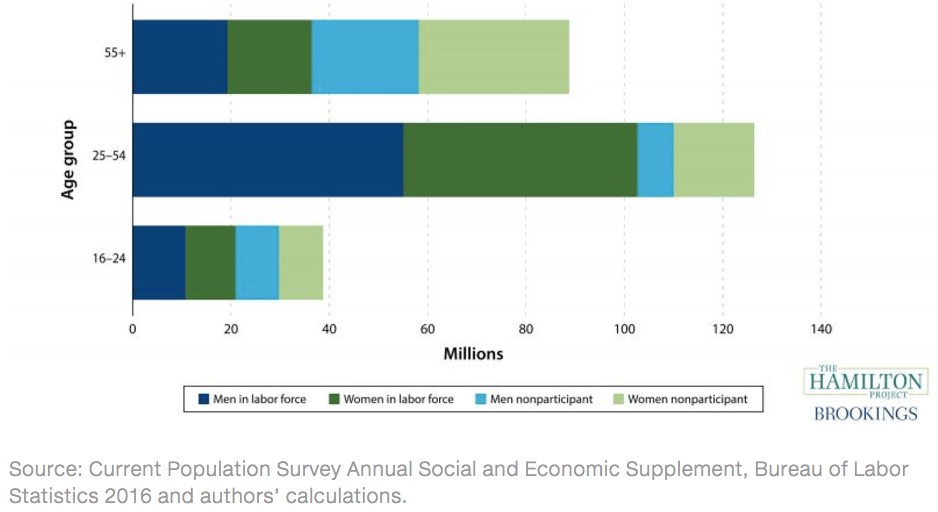 We can also look at how men’s declining participation rates mirror somewhat the trend for women:

When an economist refers to labor force participation rates, she might think of it this way…

The US labor force is composed of people 16 and over who are gainfully employed or unemployed and looking for a job. No job? Not looking? 16 or over? Then you are not participating in the labor force. Mathematically, the participation rate compares everyone who is or could be in the labor force to those who actually are in it.

My sources and more: Brookings had a wonderful network of papers on labor force participation. For the overview, this discussion was excellent. Most fascinating though was an Alan Krueger paper on the work impact of opioid use. But, if you want the Cliff Notes version, do look at NY Magazine.

Please note that several sentences in “Our Bottom Line” were published in a past econlife post.

The Money That People Won't Spend