An economist would say they are unintended consequences.

There were several problems they had hoped to solve. Because flood insurance policies were separate from property insurance, homeowners weren’t buying them. Then, when disaster hit, too many tax dollars covered the expense. In addition, the Congress wanted to make insurance available to the people who were unable to obtain it.

It did not work out as they predicted.

Their big mistake was mismatching the cost of the premiums and the level of risk. Relatively inexpensive premiums encouraged people to build homes in disaster prone areas. And even when the Congress tried to correct the problem in 2012, the opposition was so intense that they reversed themselves two years later.

In their flood insurance program, Florida echoed NFIP’s flaws. Hoping to make it affordable, the state offered catastrophe insurance at one-third the market rate. So yes, the politicians loved it because the voters loved it. Their rates even encouraged beach dwellers to build in riskier locations.

The following table displays Florida’s premium/risk mismatch. You can see that Monroe County would have to increase premiums by 126.5% to cover the risk: 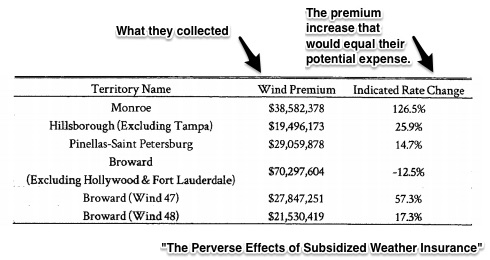 Furthermore, properties in the riskiest locations got the biggest help from government: 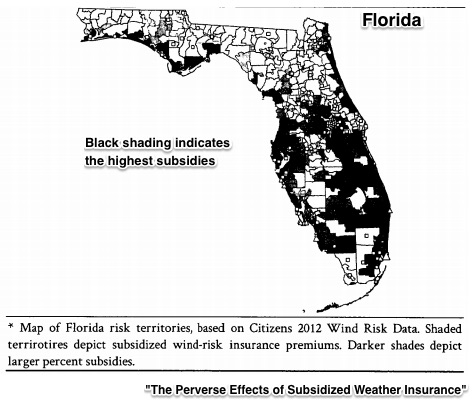 Defined as the dollars from government that make a good or a service cheaper, a subsidy skews incentives. When they decrease the price of insurance in flood prone areas, subsidies lead to more development. They also encourage people to repair homes rather than abandon them.

The result? Unintended consequences like the repetitive property losses in Mississippi and Houston.

My sources and more: The more I read, the more I wanted to read about flood insurance. For the academic perspective this is it while the federal program is described here. Then, for the history of pricing, this NY Times Magazine article from Michael Lewis was superlative. And, for current news, the possibilities include the Huffington Post and Politico.