During the Hurricane Katrina clean-up, a man from Kentucky loaded 19 generators onto his rented U-Haul. Driving 600 miles to an area of Mississippi with no power, he tried to sell them. His price was double what he had paid.

The man never sold his generators. He was called a price gouger and wound up in jail for four days. Disagreeing, an economist would say he was solving a shortage problem.

The Texas Attorney General’s office has received complaints about $3.50 a gallon gasoline and a $99.00 case of water. Because the Governor of Texas declared Harvey a disaster, those excessive prices for necessities are illegal in Texas.

As of 2012, more than 30 states had regulations that prohibited “excessive” price hikes during a disaster. (I could find no evidence that any of those states eliminated the regulation since then.):

When Hurricane Sandy struck my neighborhood in 2012, I learned firsthand about anti-price gouging regulation. New Jersey says that any retailer charging prices that rise more than 10% above their normal level during a state of emergency is violating the law.

During the NJ emergency, my local gas station resembled the following picture. Where they could find an open station, people waited on gas lines for as long as 3 hours:

If you oppose disaster price hikes, you are in good company. Nobel economics prize winner Daniel Kahneman said that businesses need to be known as fair in “Fairness as a Constraint on Profit.” Referring to economists who favor “gouging,” one of his co-authors, Richard Thaler recently added, “They are misunderstanding that if you piss people off, you pay a price…”

However, anti-gouging laws create a tradeoff.

It can be win-win. Price increases during an emergency encourage the supply side to provide more and the demand side to conserve.

By contrast, the price ceiling that a price gouging law establishes creates a shortage: 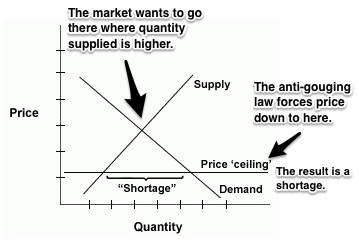 My sources and more: This excellent HBR article on price gouging gave some good background for assessing Texas policy as did this Mises Insitute discussion. More broadly, this econtalk podcast on a just price made one of my morning walks fascinating. But for the up-to-date news and regulation, you might just want to look at Business Insider and the Texas Attorney General’s office. And finally, here is the Kahneman fairness paper.

Please note that parts of this post were previously published at econlife.