There’s No Such Thing As Free Shipping

I’ve stopped ordering my Jacob’s Wonderbar coffee beans from Philz in San Francisco. The coffee was great. But two 16 ounce bags (with dark chocolate, smoke and nut aromas), are now $36 and USPS shipping, $10.28. To get the beans at their peak right after roasting, UPS (United Parcel Service) second day air would have been $41.80.

Instead, like most of us, I expect “free” and fast shipping.

According to a Deloitte online survey, the reason is the “Prime effect.” No longer do we believe that a 3-4 day delivery is fast. And we are willing to pay much less for speed:

Signaling that someone has to pay, UPS just announced a holiday surcharge. For ground home delivery from November 19 to December 2, they added 27 cents. After that, we can enjoy a 2 week no surcharge moratorium. But then that ground delivery will again have the 27 cent surcharge, a 2 or 3 day delivery, an extra 97 cents, and next day air gets another 81 cents.

We should add though that not everyone pays equally. You can see that smaller retailers suffer more…

While Amazon, as the biggest, enjoys economies of scale: 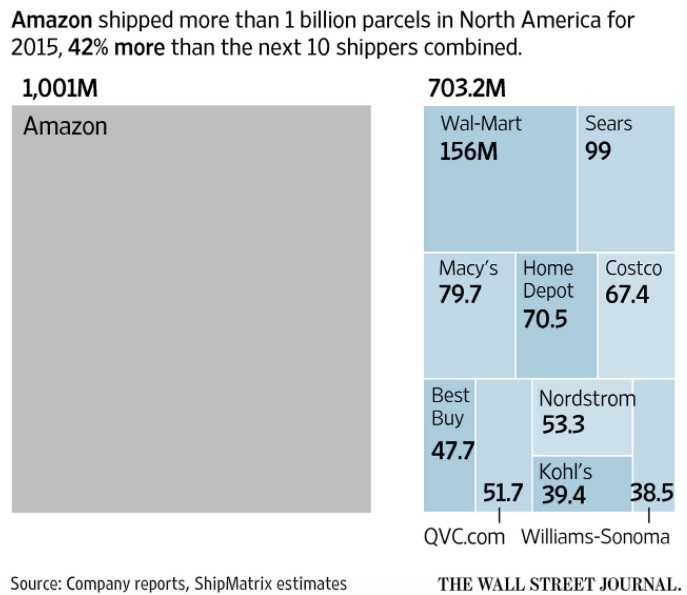 When you know, “There ain’t no such thing as a free lunch,” you’ve become an economist. Even if a friend covers the restaurant tab, the cost could be a future obligation. At the least, we “pay” with the time “spent” during lunch that might have been used elsewhere.

Similarly, someone has to pay for “free” shipping. In dollar terms, retailers might have smaller profit margins and pay less to stockholders. The prices of goods and services could rise. Or, smaller sellers could shut down. Someone somewhere has to pay for free shipping…

Just like I do by not enjoying superb Jacob’s Wonderbar coffee from Philz.

My sources and more: WSJ (mostly gated) does a good job of covering shipping issues. Here, here, and here, they provide insight about consumers, retailers and shippers. Completing the picture, this Deloitte survey says a lot about the Amazon impact.

The Mystery of the Footlong Sandwich's Missing Inch