First in the nation for gridlock, Los Angeles has a #1 award that no one wants. During 2016, LA’s average rush hour driver lost 104 hours in congestion. Think 7 years and you’ve used up a month.

The most congested U.S. urban areas: 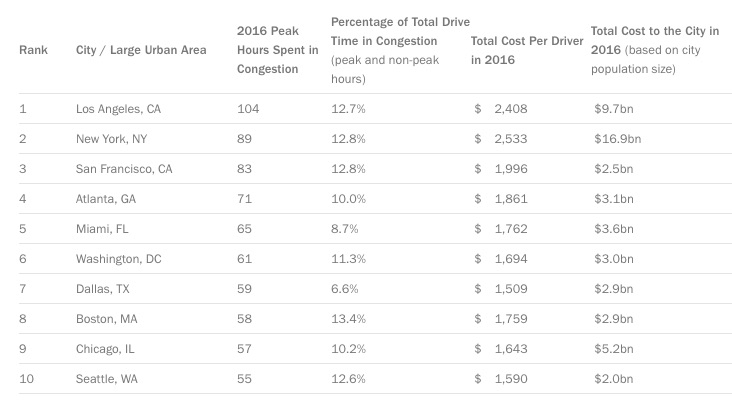 While traffic jams create a cost that might include more time at work, a family breakfast, that morning run. and extra emissions, still we resist the best solutions.

MoveNY is back with a congestion proposal for Manhattan. Because it will not require the state legislature’s approval, they think it has a chance.

The basic idea is to charge $2.75 per car for driving south of 60th street in Manhattan’s business district. Trucks would pay more and taxis, a surcharge related to usage. A decade ago, Mayor Bloomberg tried for an $8 weekday fee, 6am-6pm, but never got it.

On the demand side, a higher price can create diminished use but is costly to implement and initially unpopular.

Moving to the supply side, some have suggested diminishing congestion with new roads and lanes. Inevitably though, the extra supply attracts more drivers. One study concluded that in 10 years you wind up back where you started. Furthermore, those extra lanes cost dollars that could have been used elsewhere–maybe $10-$15 million a mile.

Solving congestion is tough because of the conflicting incentives we have created.

We say we want less congestion but our urban areas encourage it. In a recent paper, parking guru Donald Shoup reminds us that, rather like peanut butter and jelly, urban design and cars need each other. Our cities “segregate land uses (housing here, jobs there, shopping somewhere else) to increase travel demand.”

We also have the politics of diminishing congestion. When the choice was between economic efficiency and the public preference, the decision in Virginia was a new $100 million plus Beltway lane that in 10 years will be wasted spending.

In NYC the media indicate New York’s Mayor de Blasio is uninterested in the new congestion pricing plan. His appointees support these (rather tame) solutions: 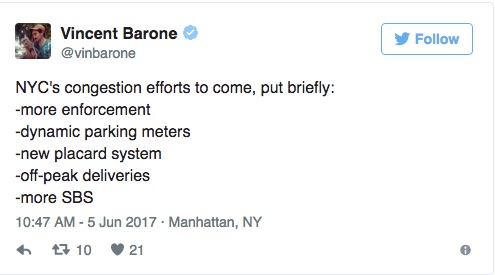 We can return to where we began. From less work time to more stress,  traffic congestion creates countless negative externalities for individuals, businesses, and municipalities.

My sources and more: Ideal complements, traffic congestion data from INRIX went well with Curbed’s and WSJ’s description of the MoveNY initiative.