This summer, the price of a vanilla ice cream cone could soar. The reason is classic demand and supply.

During 2015, Hershey began to eliminate the artificial flavors in its chocolate kisses. The reason? You and I wanted natural ingredients. We wanted real vanilla. We also are buying more spiced lattes with authentic vanilla and fewer cookies with synthetic Vanillin.

You see where this is going. Our quest for more natural foods has massively increased the demand for the vanilla bean.

The problem is that the supply side was not quite ready.

Through a labor intensive supply chain, the island of Madagascar has been the source of 80% of the world’s vanilla beans. Because the right bees do not live on the island, they’ve been hand pollinating all of the vanilla orchids that blossom for just one day each season. When the beans are ready, they are blanched, placed in sweat boxes for 48 hours and then sun-cured for 90 minutes a day during two weeks. And after that, they still need six to eight months of aging in wooden boxes.

Do note that the FT graph is in euros: 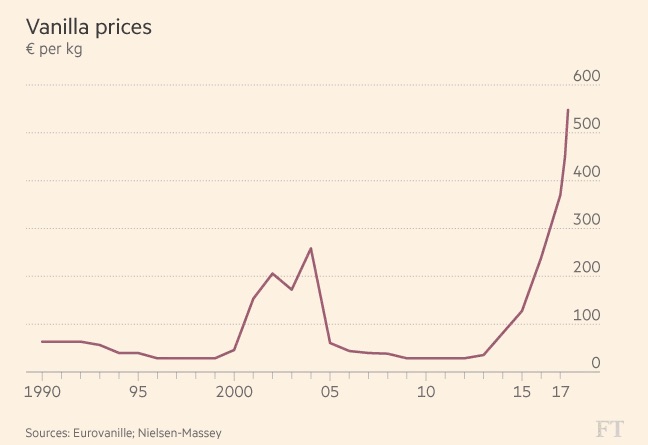 Responding to the high prices, some producers are resorting to quicker curing, earlier picking and lower quality. They are coping with more theft and also the devastation created by a cyclone that hit the island in March. 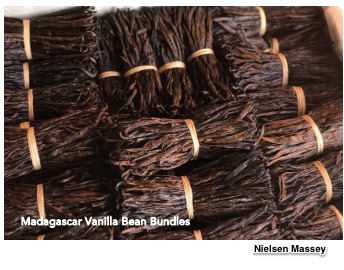 Predictably, high prices have spurred other countries like Indonesia, Uganda and India to plant more vanilla vines. But it will take years.

If, during a short time period, it is impossible for producers to increase their land, labor and capital. an economist says supply is inelastic. Sort of like an inflexible rubber band, the supply cannot stretch to meet what the market wants.

You can see below that an increase in demand for authentic vanilla has shifted the demand curve upward and to the right. However, because of the almost vertical inelastic supply curve, there is little increase in quantity and a big jump in price: 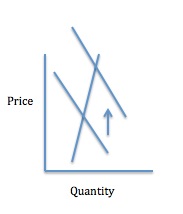 And that takes us back to where we began. My vanilla ice cream cone will probably be more expensive this summer.

My sources and more: To get a picture of vanilla markets, this vanilla importer report was handy as well as some vanilla history. It also helped to have an update from Bloomberg, Newsweek and FT. However, no article dug into the reality of Madagascar’s small farmers like the Guardian.

Why It's Tough to Solve Traffic Congestion